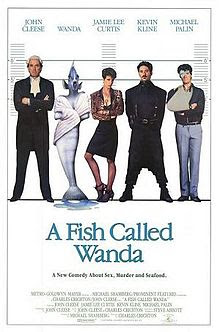 A Fish Called Wanda is a throwback to screwball comedies, directed by Charles Crichton, a veteran of English comedies from the 40s and 50s, and co-written by Crichton and Monty Python's John Cleese. It's a heist movie with Cleese as an English barrister who becomes romantically involved with a sexy American con artist named Wanda, played by Jamie Lee Curtis, and her live-wire "brother" Otto (Kevin Kline). They're in cahoots with a bank robber, George (Tom Georgeson), whom Cleese is defending. (They turned him in to the police with hopes of making off with the loot, unaware that George had spirited it away beforehand.)

John Cleese successfully convinces us that he's capable of being a romantic lead as the married, dulled-out lawyer Archie Leach, and Jamie Lee Curtis does some of her best work as Wanda. She's playful and smart, and a born performer (or a ham is more like it). Loony comedy suits her talent and her looks well, and this intermingling of British and American styles of humor seems to bring out the best in her, as it does for Cleese. But it's Kevin Kline as Otto who really breaks out of the mold, delivering an off-the-wall performance as a macho moron who reads Nietzsche but hasn't a clue what it means. Otto can't stand being insulted, particularly when it comes to his "intelligence," and he makes up for his insecurities in the typical male fashion: with violent, aggressive fervor. He's hysterical, and even won an Academy Award, which rarely happens for comedic performances (or comedic anything for that matter.)

As a movie, A Fish Called Wanda sags in parts, but it makes up for its slow spots and its indulgences by being a deliriously bawdy British-American spectacle, one that's perhaps trying too hard to one-up American comedies in terms of its proud vulgarity. (It's always more clever than a truly vulgar movie, though.) You spend a lot of the time giggling at its crude humor, when you're not laughing at the genuinely fun and earnest comic performances. And there are some particularly brilliant scenes, like the one where Archie's wife (Maria Aitken) unexpectedly returns home when Archie and Wanda are kissing on the sofa. Otto, always the jealous type and never subtle, is also inside, watching, and he tries to save Archie from being found out, displaying his inability to make up a believable story to Archie's wife, who sees through him. Kline is fast with the insults, though, and he completely throws himself into his character's manic personality. The energy in some of the scenes of this movie is wonderful stuff, a real novelty in the 80s, where so many comedies seemed too carefully planned out. The best scenes in Wanda are remarkably off-the-cuff, and yet they don't seem sloppy or unstructured. They have the panache and style of good writing and the zing of good improvisation.

Michael Palin, another Monty Python regular, co-stars as Ken, one of the accomplices in the bank robbery scheme that quickly becomes subordinate to the romantic story and this film's garish insanity. The cast reunited for 1996's Fierce Creatures, which wasn't as tight or as clever as Wanda. 1988.
by Jacob Lusk @ pannedreview
Email ThisBlogThis!Share to TwitterShare to FacebookShare to Pinterest
Tags 1988, Charles Crichton, Jamie Lee Curtis, John Cleese, Kevin Kline, Michael Palin