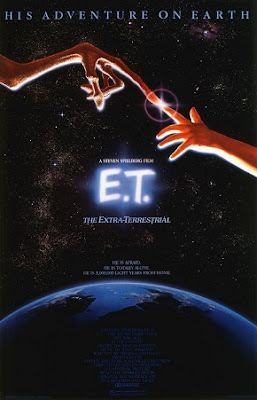 One of the few remaining mysteries in filmdom is that rare miracle when a good or a great movie doesn't get trashed by a franchise of sequels and reboots and remakes and TV show spin-offs. E.T. The Extra-Terrestrial (1982) is in the company of a very few movies that were important pop culture phenomenons, box office hits, and stand-alone films. Perhaps this is one of the benefits of being Steven Spielberg, presumably one of the three or four directors in Hollywood who can do just about anything he wants. He's got enough of a financial track record to be trusted by the studio execs. Ironically, of course, this is the kind of freedom that tends to ruin a director's career. Indeed, Spielberg's best work was largely behind him with the release of E.T. Go back and watch Jaws (1975) and even before that, The Sugarland Express (1974) (his feature film debut, if you don't count the made-for-television Duel), and you'll see a fresher, more interesting body of work than the stuff in War Horse and his remake of The War of the Worlds.

I often hear people malign E.T., as though it's their least favorite Spielberg movie. I think they're missing something really marvelous. It's not got all the bells and whistles of a Jurassic Park or a Raiders of the Lost Ark or a whatever-else you want to compare it to. This movie is primarily a brief return to childhood fantasies, to the time when things like alien men visiting earth seemed real and wonderful. I think too that E.T. has a remarkable ability to conjure up the memories of one's own specific childhood, whether it had anything to do with aliens or not. There's a looming sense of tragedy, because it's all so ephemeral, but also a bursting feeling of gratitude that you get to relive something that's already difficult to put into words. Our childhoods are best understood through images in our heads, and certain smells and sounds--often experienced in movies--that provide little jolts of memory, triggered unexpectedly by seemingly random occurrences, and never predictably so. They're always so delightfully unmanipulated by us. We struggle to force memories, but when a movie like E.T. comes along, they seem to bubble up to the surface of our consciousness, overflowing for a moment.

This is the experience I had while watching E.T. for probably the third time in my life. I remember watching it in high school one afternoon when I was home from school, and I remember being emotionally affected by it then, too. (I don't remember the very first time I saw E.T., but it was long enough ago that the second viewing was pretty fresh. I couldn't even remember whether or not E.T. survived the movie.)

The young cast is remarkable considering what's demanded of them. And yet they exude an easy, natural likability that feels unforced. Henry Thomas plays the boy Elliott, who discovers E.T. in his suburban California backyard. Robert MacNaughton plays his older brother Michael (he and Jesse Eisenberg bear a striking resemblance to each other), and young Drew Barrymore is the five-year-old sister Gertie. Their mom is played by Dee Wallace, who was born to play somebody's mother in just about every noteworthy film she's starred in. She's on the periphery of this movie's story, because the world of the adults is portrayed as from the outside looking in. But she's not painted as a grump trying to rain on the kids' parade. She's just too busy trying to keep the household in shape. (Their dad has run off to Mexico with another woman. It's worth noting that Spielberg tried to go for a more honest look at the American family, and to have overlooked the rising divorce rate would have been a pointed mark of ignorance, or perhaps just wishful thinking.)

With Peter Coyote as one of the scientists who intrude upon the children's world. (He's reliving some childhood dreams through Elliott, though, and so he's not there to turn E.T. into a lab experiment.) The adults aren't portrayed as pure evil or corrupt, necessarily. They're trying to help E.T., who can't survive in our atmosphere. And yet, there's a striking visual difference between the adults and the children. The children aren't afraid to approach E.T. as they are, but the grown-ups are adorned in all kinds of outer-spacey looking garb, and they cocoon the house with a plastic makeshift tent, presumably to avoid tainting their would-be science experiment, E.T. You get a sense of the emotional difference between adults and children, too, as it's played out in their surroundings: the homey, imaginative environment of the house, which is full of toys and constant reminders that children exist within it, is transformed into something cold, sterile, and utterly scientific.

C. Thomas Howell also appears, billed as Tom Howell, playing one of Michael's buddies. E.T. was voiced partly by actress Debra Winger. The script is by Melissa Mathison. John Williams composed the score. (You can hear a lot of similarities between it and his Star Wars score, but there are also moments that remind you of the music he composed for Brian De Palma's weird thriller The Fury.)
by Jacob Lusk @ pannedreview
Email ThisBlogThis!Share to TwitterShare to FacebookShare to Pinterest
Tags 1982, C. Thomas Howell, Debra Winger, Dee Wallace, Drew Barrymore, Henry Thomas, Peter Coyote, Robert McNaughton, Steven Spielberg