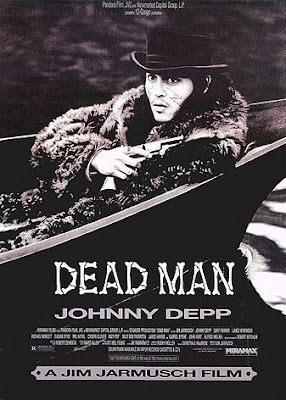 A dull Western about a man named William Blake (Johnny Depp) who takes it on the lam after he kills a another man, sort of in self-defense. Then he meets an Indian named Nobody who spouts off philosophical sounding ramblings that make no sense. Writer-director Jim Jarmusch confuses pretension for art with this antithetical Western. It's in black-and-white, a crucial mistake. Perhaps some color would have made the movie feel less embalmed, but I'm afraid that was Jarmusch's intent all along: he's trying to make something poetic, and all he really does is make a film that reminds us why we hate bad poetry, or why we don't give poetry a chance when it's delivered to us without imagination.

The camera stays in close-up for much of the film, so we don't even get the usually standard pleasure of the vastness of space that many Westerns capture. This, combined with the grim ugliness of the black-and-white photography, makes much of Dead Man pretty dead indeed. Johnny Depp is okay, especially since he's playing a relatively normal character, but he's such a subdued personality when he's not hamming it up, that he's hardly magnetic enough to pull this long, meandering movie out of its self-induced sleepwalk. If people were mesmerized by all the poetry of the black-and-white and the false wisdom of the mystical "Nobody," it's because they were probably ready to embrace something that was different, and there weren't many good traditional Westerns coming out of the 1990s. But turning this genre into something bland and plodding is no way to save it from the tiredness of doing the same thing over and over.

There are interesting moments, and at times Jarmusch finds the humor in it. Some of the bandits trying to capture William Blake--who's got a 500 dollar bounty placed on him by the father of the man he killed--are funny in a ruthlessly sick sort of way, like the man who allegedly murdered his parents, and then engaged in necrophilia and cannibalism with their bodies. And the character of Nobody doesn't seem to totally buy into the BS he's peddling to William. Is he an ironic Indian? (He's also convinced that William is the William Blake, as in the 18th century British Romanticist poet.) But, like Dances With Wolves, the film tries to imbibe the Native Americans with wisdom and mystical powers, all dispensed in the form of hokey sounding proverbs, and you never buy any of it: it's too patronizing, and too laughable. It's the never-ending search for self-importance that dooms so many "indie" films. (There's also a running joke about tobacco that isn't funny--it's done to death and never had any juice to begin with.)