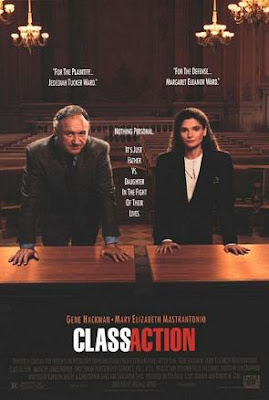 Legal mishmash in which the attorneys going head-to-head are father and daughter, played by Gene Hackman and Mary Elizabeth Mastrantonio. It's sort of a variation on Adam's Rib (1949) (where Katharine Hepburn and Spencer Tracy were opposing council who also happened to be husband and wife), minus the comedy.

A courtroom drama without wit or style tends to be forgotten within a decade, and except for the capable performance of Gene Hackman, Class Action fails to stand apart. It's showing its early-90s aesthetics, from the bad synthesizer music to Mastrantonio's hostile wardrobe to the overdone dramatic scenes. (Father and daughter have issues: he's spent his whole life defending the little guy, but at the expense of his family, and she can't forgive him for it. Worse still, he cheated on her mother, and she's still stinging from the offense even though Mom has made peace with it.)

Mary Elizabeth Mastrantonio had a brief moment as one of the big female performers of the late 80s and early 90s, playing the lead in the James Cameron underwater-thriller The Abyss (1989) and giving us a feminist Maid Marian in Robin Hood: Prince of Thieves (1991). She's also appeared in De Palma's 1983 update of Scarface and Scorcese's sequel to The Hustler, The Color of Money (1986), opposite Paul Newman and Tom Cruise. But her career hasn't lasted: she embodied the type of ambitious yuppie feminist character that was fashionable for a brief period of time at the movie, with her pinched face and her strong demeanor and her piercing eyes. But that period came and went, and actresses like her have seen a dearth of big movie roles. This isn't to say that she's a bad actress, or a limited actress, but that she was likely typecast. The thing that saves her in Class Action is an underlying vulnerability: she's still got scruples, even though she dreams of becoming her firm's youngest (and presumably first female) partner. And she's got spunk, reveling at the opportunity to face off with her father.

They have an on-again-off-again relationship, and the director, Michael Apted, and the screenwriters, Carolyn Shelby, Christopher Ames, and Samantha Shad, use this bit of backstage drama to give their story "dramatic force," if you will. It's full of those dreadfully self-satisfied shouting matches that pander to the Academy Awards voters. In fact, Class Action seems like one long montage of Oscar clips. Only Gene Hackman seems genuine enough not to be bucking for some kind of awards recognition. His performance is the freshest thing in the movie, even though he's older than most of the other big cast members. He's not out to make a career for himself as a performer (he's already done this), and as such he's relaxed, confident, and he makes the whole movie look less stodgy and self-important. One of the benefits of being a pro (and there often aren't many when it comes to getting good parts and being treated with respect by studios and producers).

With Colin Friels as Mastrantonio's lawyer-boyfriend, a colleague and an obviously corrupt yuppie brat who cares about his career more than ethics. (It's easier to hate him when he's so full of himself.) Also with Joanna Merlin as Hackman's wife, who just wants everybody to get along: She's a teacher in the inner-city, and she's the forgiving wife of the adulterer, the professional peacemaker, who must be killed off as soon as possible, to give the father and daughter new pressure to make amends with each other; Donald Moffat as Mastrantonio's boss, Laurence (Larry) Fishburne as Hackman's paralegal, Jonathan Silverman as Mastrantonio's paralegal, and Jan Rubes as a witness who testifies against the automobile corporation that Hackman's trying to fry for negligence. 1991.
by Jacob Lusk @ pannedreview
Email ThisBlogThis!Share to TwitterShare to FacebookShare to Pinterest
Tags 1991, Donald Moffat, Gene Hackman, Jonathan Silverman, Laurence Fishburne, Mary Elizabeth Mastrantonio, Michael Apted