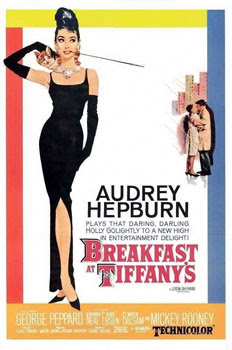 Breakfast at Tiffany's (1961) showcases Audrey Hepburn's glamorous loveliness, and it probably cemented people's equating of Hepburn with cool cosmopolitan chic. But the movie's a bore, stretched out with lots of unconvincing little vignettes until it reaches its blatantly obvious conclusion. Hepburn plays Holly Golightly, a frivolous girl who lives on the cash of wealthy gentlemen, and throws loud parties in her cramped East Side apartment in New York, to the chagrin of her landlord (Mickey Rooney made up to look Japanese. He's a caricature, the embodiment of what Americans think of when they use the slur, "Jap.") Holly becomes friends with her new neighbor, Paul (George Peppard), whom she calls "Fred." Paul's a writer who gets paid to sleep with a wealthy interior decorator (Patricia Neal), which in turn funds his burgeoning literary career.

As I understand it, the relationship between George and Holly in Truman Capote's novel was considerably more Will-and-Grace than it is in the movie. Screenwriter George Axelrod turned Paul from gay to straight, and made him into the one redemptive love interest in Holly's long line of "rats" and "super rats," the men she pursues for her love of money. But it's so hard to want Paul and Holly to get together when she treats him with such indifference at times. She's flighty, and when she's not being impetuous and charming, she's distastefully rotten, and her self-absorption, which is always apparent, becomes overt and offensive. Paul's a nice guy, Holly's the girl he can't have. When he finally unmasks her at the end, breaking her stubbornness, you wish he could have told her earlier. The film would have been shorter and far less irritating.

The problem with a lot of Audrey Hepburn's movies is that directors and screenwriters are always trying to turn her into something "real" or "deep." She can't just be chic and stylish, and her stylishness can never come from within. It always has to come from somewhere or someone else. She has to be a country girl who's come to the Big Apple to re-invent herself (as in Breakfast at Tiffany's), or a chauffeur's daughter who goes to Paris to get culture (as in Sabrina), or a poor flower girl in My Fair Lady whose source of sophistication comes from a snide old fuddy-duddy of a linguistics professor.

The movies that let Audrey be Audrey, naturally, and with nobody to credit her stylishness to but herself, are the ones that have held up best. I'm thinking most particularly about Charade (1963), which never tries to go serious on us, the way Breakfast at Tiffany's does. It's always proudly and shrewdly displaying its enchanting trashiness. Breakfast at Tiffany's creates contrived complications to try and elevate itself. Had the tone remained light, the way it is for about half an hour, this could have been a comedy classic of its era, something smarter and more off-beat than the run-of-the-mill Doris Day-Rock Hudson vehicles and other such romantic comedies from the 1960s. Instead, it's remembered as a gooey romance, or rather, it's remembered as an Audrey Hepburn runway, where she can show off her attractiveness. (Which would have been find, had the movie been content to be light and frivolous rather than heavy and mildly portentious.)

George Peppard, as the co-star, is nice and sincere. He doesn't stand out, but then, he's playing it straight to Audrey's ultra-off-kilter personality. Axelrod tries to write dialogue, some of it likely right from Capote's novel, that will become instant trash-poetry when it comes out of Hepburn's mouth. It doesn't always work out that way. (Joseph L. Mankiewicz got damn lucky with Bette Davis in All About Eve: every line was gold when spoken by Margo Channing.) As director, Blake Edwards should have referred more to his comic abilities and less to his sentimental ones. This feels like a less-weapy-eyed prologue to Days of Wine and Roses, saved from being maudlin by the notorious happy ending, where man, woman, and Cat are united.