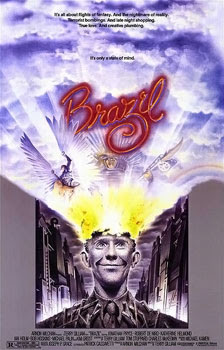 Terry Gilliam of Monty Python directed Brazil (1985), a bizarre thriller that turns bureaucracy into a vehicle for a horrific comic satire, in which a government flunky named Sam Lowry (Jonathan Pryce) becomes involved in anti-government terrorism and generally frowned-upon behavior. The film is set "somewhere in the 20th century." Everyone wears suits, coats, and fedoras (it's like watching a movie where all the men are played by Humphrey Bogart), and the general atmosphere feels very 1940sish, as if Stanley Kubrick and George Orwell suddenly converged into the space of a single body and made a movie in 1948. Gilliam co-wrote the script with Tom Stoppard and Charles McKeown. Surely they have concocted one of the strangest movies ever made, but it's also a pretty accurate comment on the enslaving capabilities of red tape and forms and going through the proper channels, all trademarks of government.

The scene where Sam's AC breaks and a rogue repairman (played by Robert De Niro) opens up the walls to reveal a jumbled labyrinth of wires and tubes, is a spot-on analogy for the ugly tangled web that is bureaucracy. And there are a number of quirky scenes where this theme is embellished upon, including a scene with a government stenographer who records phone conversations for accurate records, and one particularly horrific exchange (a woman being attacked--viciously, judging by the screams) is taking place while she records every line with a banal, unfazed devotion to her job.

The problem with Brazil is that it's a lumbering movie, clocking in at nearly two hours and thirty minutes, and by the end of it you feel you've been hit over the head repeatedly with the same metaphors about the sluggishness of government, and how the encroaching tentacles of bureaucracy turn people into dulled out slaves, whose only means of feeling any hint of pleasure come in the pursuit of superficial things. (Sam's mother, played beautifully by Katherine Helmond, is a cosmetic surgery addict. She and her batty friend see opposing plastic surgeons, with alternately freaky and horrifying results.)

Jonathan Pryce feels like a combination of Jimmy Stewart and Mr. Bean, or maybe he's just a younger version of John Cleese. He's an okay Everyman, but certainly not the most compelling performer in the movie. De Niro's brief scenes do brighten things up a bit, and one can't help but marvel at the film's grandly imaginative set designs and the frequently astonishing camerawork of Roger Pratt. But overall it's a mixed bag, one that has apparently developed a cult following. Many have seen it as a sort of re-imagining of George Orwell's futuristic novel 1984.