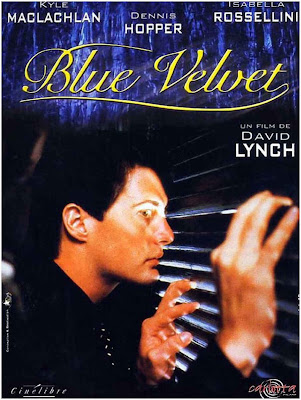 Writer-director David Lynch's Blue Velvet (1986) exists in a suburban vacuum that's some kind of tangled 1950s-1980s dream. Lynch takes a highly normal suburban boyhood fantasy, becoming involved in a real-life mystery, and throws it into the depths of sordidness. It's almost too enticing to witness the undressing of suburbia, a place that is so squeaky clean on the outside it almost has to be a den of devils on the inside. Kyle MacLachlan plays the hero, Jeffrey, who discovers a severed human ear while walking through a field near his quiet Lumberton hometown, a place that recalls every falsely cheerful family sitcom ever made.

Jeffrey wastes no time in delivering the ear to the local police, but this effectively ends his ability to partake in the mystery legally, so, with the help of the detective's teenage daughter, Sandy (Laura Dern), he proceeds with his own makeshift investigation and sneaks into the apartment of a lounge singer (Isabella Rossellini), whose name Sandy has heard mentioned in connection with the ongoing investigation of the detached ear. The lounge singer is named Dorothy Vallens, and she's about as stable as Judy Garland. She has that tragic look, mixed with a distinctively foreign allure that makes her suspect to our suburbanite values and beliefs. (Rossellini is the daughter of Ingrid Bergman, and you can hear it in her voice and see it in her face.)

Enter Dennis Hopper as Frank, the psychotic, drug-addicted, sadomasochist who's forcing Dorothy to comply with his weird fetishistic fantasies. Frank's got to be one of the scariest human figures in horror-thriller movie history, on par with Robert Mitchum's Reverend Harry Powell in Night of the Hunter and Jack Nicholson's nutcase hotel sitter in The Shining. This is the point in the movie where Jeffrey is probably thinking that "normal" isn't so bad, and that those mysteries we read about as children and watched on television and at the movies were deliciously entertaining because they were false, safe mysteries where even the worst villains conducted themselves within reasonable boundaries. Dennis Hopper has no boundaries, nor does the director, who puts us in the position of the peeping tom and the "peeped-upon," on a far more visceral and uncomfortable level than say, Hitchcock did, in his Rear Window.

The thing about Blue Velvet is that it's an off-putting descent into a frightening suburban reality, because it breaks through the surface in others that we often feel superior to, and in the process, it exposes our own carefully constructed phoniness as an obviously thin veneer. Sandy says to Jeffrey, "I don't know whether you're a detective or a pervert," after he tells her of his plan to infiltrate Dorothy's apartment for the first time. He tells her with false coyness that she'll just have to find out. What he really means is that he'll just have to find out, because he doesn't know himself well enough to know what he really wants, why he's really attracted to the "mystery". For him, "mystery" is still a gimmick designed primarily for his own amusement, not something that involves or affects real people. It lulls him in with the siren song of the false mysteries (the camera occasionally shows us shots of various 1940s film noirs on the TV screen, a reminder of the ground we're treading, which is quite far away from the mock-sophisticated safety of Hollywood). In David Lynch territory, nothing is ever safe and neat and tidy. But it's not a pleasurable entertainment. It's on the level of a snuff movie, and for all its ironic insights into human nature and the phoniness of the world it portrays, it's hard to watch.