This Is Spinal Tap 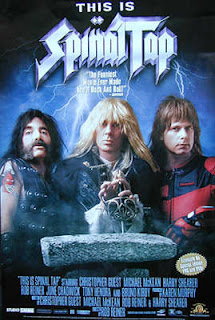 This Is Spinal Tap (1984) is a wonderful send-up of the self-importance of heavy metal rock bands from the 1970s. British rockers Spinal Tap could be a number of groups (they reminded me of Blue Oyster Cult with all the dark pseudo-occultist imagery of their costumes and stage decor). They are addicted to their inflated sense of star status, and flatter themselves about their perceived poetic abilities. As the movie (and the "documentary" being made about them touring the States) progresses, we see their credibility and their popularity diminish. It's laced with little moments of off-kilter comedy, and the performances of the band members are so utterly deadpan that you sometimes don't know when something is supposed to be a gag or if it's being played straight. That's part of the fun of this movie, though.

Christopher Guest, Michael McKean, Harry Shearer, R.J. Parnell, and David Kaff play the members of Spinal Tap, and do all of the playing and singing themselves. The movie's a mockumentary (the first one to involve many of the people who were behind such later films as Waiting For Guffman and Best in Show), and while it's often an hysterically droll experience, it's also surprisingly energetic, and even serious at times. The lines between mock and doc are purposely blurred, and the performances are completely invested in the material, which may be one of the reasons This Is Spinal Tap remains such a cult classic. Written by Guest, McKean, Shearer, and director Rob Reiner (who plays the director of the documentary).