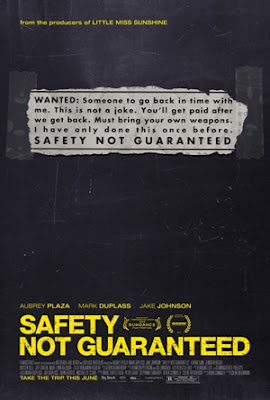 Safety Not Guaranteed is this year's Eternal Sunshine of the Spotless Mind. Somewhere, deep beneath this film's quirky, sometimes pretentious, all-too-obvious "indie"-ness, lies an actual movie. What we see is a sort of conglomeration of sappy feel-good dramadies and "too-clever-to-be-real" dramadies. The line between these two types can be difficult to spot, but it's there. Aubrey Plaza, whose downbeat, mad-at-the-world, affluent-suburban-kid act is funny on Parks and Recreation, may never play a different character again after this movie. She's always just a half-frown away from being April. But she's likable, and she carries this movie through the genuine cleverness for the first half and the meandering flakiness that carries the rest of the movie away into La-La-land.

She plays Darius, an intern at a Seattle magazine, who accompanies one of the columnists (Jake M. Johnson, of TV's New Girl) and a fellow intern (Karan Soni), to a small coastal town to write a piece on an eccentric named Kenneth (Mark Duplass), who's soliciting a partner for his time traveling endeavors in the classifieds section of the paper.

The relationships that develop as a result of this oddball set of events are interesting to watch, but you can never shake the creepy feeling you get because he's so much older than she is. This isn't the same as when Audrey Hepburn only acted with men who were hundreds of years older than her (Cary Grant in Charade, Humphrey Bogart in Sabrina, Rex Harrison in My Fair Lady, etc). Audrey seemed perpetually grown-up (young enough to be chic, old enough to be sophisticated, wordly, and legal). Aubrey Plaza (the first names are only a letter away from each other), is perpetually adolescent. She's in her late 20s, but she looks 16. The chemistry between the two actors is muffled by the age discrpenancy.

Jake Johnson undergoes an inexplicable change from dirtbag to nice guy, which is odd because the reason he takes the assignment to follow the "crazy guy building a time machine" is so that he can meet up with an old flame for a one night stand. Johnson gives a winning performance that makes his sleazy persona pitifully real and somehow likable, but you wonder how the writer, Derek Connolly, convinced himself that Johnson's character could pull such a profound 180 so quickly. Johnson's performance lends it more credibility than it deserves.

The movie is at its best when it doesn't try to go for the predictable sentimentality that indie movies always shun with tongue in cheek. It's a peculiar tension to be both sweet and too smart for its own good. Aubrey Plaza is on her way to being the same kind of indie movie poster child as someone like Zooey Deschanel, who represents a sort of concentration of everything darling and obnoxious about "indie" culture. But Plaza wins you over because she's a cynic, but she's also good with the quippy lines, and Connolly has a knack for writing dialogue that is funny without beating the audience over the head. Such are the particular joys of Safety Not Guaranteed, a movie which is amusing, perhaps slight, perhaps less important and reverential about life than it thinks it is, but not totally dishonest nonetheless. (Some audience members may find that the marketing for this movie has misled them. It's not at all about time travel, but about the cult of eccentricity and the unexpected founding of new relationships.)

Interesting review. Never heard of the movie before, but it sounds like it could be entertaining. Mostly I'm commenting because I wanted to say that I agree with the assessment of Zooey. "Concentration of everything darling and obnoxious about 'indie' culture". Too true.