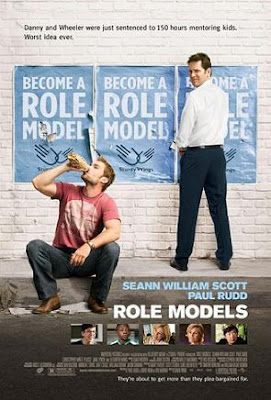 Role Models (2008) is another one of those man-child-becomes-mature comedies, bolstered slightly by Paul Rudd's performance. He plays Danny, who pedals energy drinks to America's youth, with the help of his partner, Wheeler (Seann William Scott), who wears a giant minotaur suit. After Danny has a meltdown (following a rejection by his would-be fiance, he and Wheeler are ordered to participate in a mentoring program called Sturdy Wings. Their "littles" are a nerdy fantasy freak named Augie (Christopher Mintz-Plasse) and a foul-mouthed devil-child named Ronnie (Bobb'e J. Thompson). If watching a 9-year-old boy curse like a sailor is your idea of a good time, then Role Models is the movie for you.

It's an elongated sitcom, written by Rudd, director David Wain, Ken Marino, and Timothy Dowling, and between the four of them they couldn't come up with any original ideas or gags. The characters are all familiar archetypes: Danny is a sardonic curmudgeon, Wheeler is a horny man-whore, Elizabeth Banks, as Danny's girlfriend, is the beautiful, successful lawyer who's somehow put up with Danny's shiftless negativity for seven years, and Jane Lynch is the oddball director of the Big Brother-like organization. Lynch gives the film a few moments of relief, but her character is weird for no reason. There isn't anything credible about her, or anyone else. Forget motivation or story impetus. There are moments where Rudd and Scott mesh well together. They get into a comic rhythm that is funny and engaging, but the movie isn't well-thought-out enough to sustain their performances, and their performances don't do much for the movie overall. They may get you through it, but that's about it.