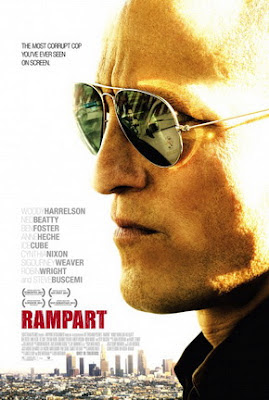 Here is a movie that succeeds in suppressing the most appealing thing about Woody Harrelson--his ability to be funny even at his own expense. In return we get a masochistic (at least, you'll feel you've put yourself through something painful by the end) study of an arrogant L.A. cop whose career of corruption, abuse, and cockiness finally catches up with him. The question is, how long will it take before he's aware of it? As a man who's the last one to know that his game is up, Harrelson is quite believable. He's got a knack for playing macho jerks, but without the humorous side, there's not much to endear us to Harrelson's clueless cop.

Rampart (2012) is set in 1999. Officer Brown (Harrelson) has been caught beating a man on tape, and because the police department is already embroiled in a massive, complicated scandal, they decide to feed Brown to the press. He doesn't like the idea of being the rolling head, mostly because he's living in a world of denial, unable to admit to himself or anyone else that he's capable of working outside the parameters of the law. Even the case twelve years earlier in which Brown allegedly killed a serial rapist, emerging a hero, is thrown into question. Meanwhile, Brown's not exactly father or husband of the year, having married two sisters, fathering a daughter with each, and failing to be present in any of their lives in a substantive manner.

James Ellroy, the hyperbolic, ultra-weird mystery novelist who wrote L.A. Confidential, co-wrote the screenplay for this with the director, Oren Moverman, who lacks the kind of skillful imagination to make Rampart very compelling. You can hardly tell that Ellroy had much to do with this, since most of his work is dripping with pulpy dialogue, sometimes wonderful, sometimes ridiculous. Rampart is too cautious to try anything like that, and as such it walks a straight line of mediocrity. It's got a cast of characters who all turn out to be fairly uninteresting, but ultimately we're told that's the whole point: Brown is living in a dream world where he's Bruce Willis from Die Hard, only everyone else is firmly ensconced in reality. But the movie hasn't much else to go on from there, and spending two hours with a deluded cop with too much machismo to make rational decisions isn't all that much of a good time, unless your idea of a good time is watching re-runs of Cops.

With Ben Foster, Robin Wright (as a lawyer who enjoys sleeping with Brown because of his reputation as a guy who kills serial rapists), Anne Heche and Cynthia Nixon as the two sisters he married (one after the other, not at the same time, the movie points out to us), Sigourney Weaver as the hard-nosed district attorney, Ice Cub, Brie Larson (who is convincing as Harrelson's estranged teenage daughter, although her disgruntled teenage misfit daughter is cliched in the most obvious, unimaginative way), Steve Buscemi, Jon Foster, and Ned Beatty, as a retired cop who's "helping" Brown make a little money on the side.
by Jacob Lusk @ pannedreview
Email ThisBlogThis!Share to TwitterShare to FacebookShare to Pinterest
Tags 2012, Anne Heche, Ben Foster, Brie Larson, Cynthia Nixon, Ice Cube, Ned Beatty, Robin Wright, Sigourney Weaver, Steve Buscemi, Woody Harrelson