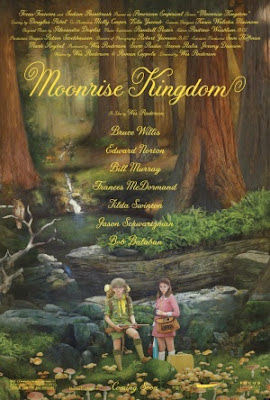 Moonrise Kingdom, the latest from writer-director Wes Anderson, is equal parts lyrical children's fable and quirky misadventure. I found it more enjoyable than The Life Aquatic (the only other Anderson movie I've seen to date), which did not hold my interest; but it's also the kind of movie that you might just as easily sleep through. Moonrise Kingdom feels like a Charlie Brown movie stretched out to feature-length. That's probably because it's set in the mid-60s, like Charlie Brown, and the story involves a group of boy scouts (that seems Charlie Brown-ish too.) Even the music, and the voices of many of the children, captured this sort of cartoon childhood nostalgia. It's cute for a while, but the overall effect is banal. It's forced nostalgia. It looks more retro than most movies that are set in a past time, but it also feels incredibly shallow and disingenuous.

The movie is best not over-thought, because you might start to read a bunch of meaningless symbolism into it that isn't there. At its core, it's about an orphan named Sam (Jared Gilman), the misfit of the boy scout troupe, who abandons his camp entrenched on the New England coast, and takes off with a local girl named Suzy (Kara Hayward) with whom he has fallen in love. The incompetent adults in the movie try and track down their missing kiddos, twice losing them. These include Suzy's parents (Bill Murray and Frances McDormand, two lawyers who might be a less-interesting version of the characters played by Spencer Tracy and Katharine Hepburn in the 1949 comedy Adam's Rib), the boy scout leader (Edward Norton, who delivers every line with straight-faced aplomb and dedication, just like a boy scout), and the local coast guard Captain (Bruce Willis, who becomes a sort of father figure for the unwanted Sam).

Visually speaking, Moonrise Kingdom has some lovely images, and it seems as though it were pieced together like a storybook. The visual beauty is offset by Anderson's nonchalant, almost recklessly (but not quite) non-serious approach. It's not that he doesn't care about the story or the characters; they're not being pushed onto the screen to be mocked or made fun of, but he doesn't elevate their problems. For these characters, everything is already so elevated in their minds (from the Scout Master's obsession with orderly cabins and strictly adhered-to schedules to Sam and Suzy's determined puppy love), that Anderson is right to reign himself in. The movie would have felt heavy-handed otherwise. This is a portrait of a group of people who are taking everything far more seriously than the movie takes them. Still, Anderson hasn't pulled off anything that great. His inventions are a kind of obvious kitsch charm that he's been working on presumably all the way back to his early films. He's got a following that has embraced his cutesy hipster style. It's not offensive, but not as great as everyone's making it out to be.

With Tilda Swinton (looking stuffy and quite hilarious as the social services lady) and Harvey Keitel as a self-important Scout Master.