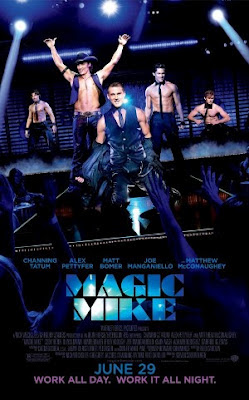 With Magic Mike, director Steven Soderbergh employs a smart marketing technique to draw droves of shrieking women into the theaters. He promises them male striptease acts from the safety of the big screen. This may be the first mainstream sex comedy aimed almost exclusively at women, except it's not really about sex. The dance routines are a bit risque for the suburban audience being targeted, but they're mostly repetitive, and what's more, aren't all that energetic. As sweaty and mobile as these boys are on the stage, they fail to breathe any life into the movie (the way a good musical is recharged by its numbers). Two-thirds of the way in, I could tell that the excitement and the energy had drained out of the audience, who came in doing cat calls and came out tired because the movie was so long and so dull.

The stripteasing scenes are, of course, the eye candy, just like the nude scenes in all those redundant slasher films from the 1980s were strategically inserted to draw a male audience in and on, keeping them waiting for what they may or may not see next. But there's never anything substantial going on in between these moments. Magic Mike is the same way. It has a dull story about the titular star stripper, (played by Channing Tatum) who has dreams of doing something more with his life (specifically, starting a custom furniture business). He sucks an impressionable 19-year-old loafer (Alex Pettyfer) into the biz, much to the chagrin of the boy's older, responsible, drag-of-a-sister (Cody Horn). The boy of course doesn't know how to handle his new-found "popularity" and eventually becomes a druggie.

The dramatic scenes are overly familiar. They're probably the stuff you've seen if you've spent any significant portion of your life watching the WB Network. The actors have no charisma, nothing interesting to do (well, that statement may not be agreed upon by a large portion of the audience). Horn seems like a less exciting version of Kristen Stewart (which makes her a corpse's corpse), Tatum seems to be playing himself, that is, occasionally charming but ultimately lacking in imagination. He turns over a dining room chair and pronounces it a knock-off, because he's a savant for carpentry. Totally believable.

Of course, people aren't lining up to see Magic Mike for its story. But it seems to me a sad state of affairs when nobody cares about the movie itself. You can get eye candy anywhere, from those mindless idiots on the Jersey Shore to an Abercrombie & Fitch ad, but movies are supposed to be capable of more than that. Magic Mike fits in with the summer movie line-up because it too is all about the special effects. Instead of buildings exploding, it's bodies strutting, and flexing and grinding. Magic Mike could have been salvaged by a sense of humor, but it's utterly lacking in wit, and every next step is so painfully obvious that you become increasingly aware of the two hours it takes to get from the beginning to the end.

Matthew McConaughey, who was so funny in an earlier 2012 movie, Bernie, is dizzyingly unappealing in this movie. His character, Dallas, is sort of the emcee of the strip club. He owns the place, but rarely does any of the stripteasing anymore. What's more, he's got plans to move the operation from Tampa to Miami, where they can dream bigger. This presumably means wealthier clientele. But it's such a lame attempt to put something in this movie at stake: does anyone actually care if they are able to successfully relocate?

Steven Soderbergh was able to turn Erin Brockovich into a fun movie by utilizing the natural charm and wit of its star, Julia Roberts. Magic Mike doesn't have that. Channing Tatum may not be the worst actor to grace the screen, but he's got no personality, no genuine star quality or mystery about him to give any durable staying power as an actor. Like all the other dancers, he's about as valuable as his appearance, which, like Magic Mike, isn't sustainable for long.

I saw Magic Mike and have to say that while the eye candy was good, that's about all I can even say about the movie. The rest of it was awful. I felt kinda dirty after seeing it too.

Yeah, it's not a good movie at all.
The intended audience may get their 10 bucks' worth in terms of shirtless dudes dancing, but you could feel the energy draining out of the audience as it wore on...and on.