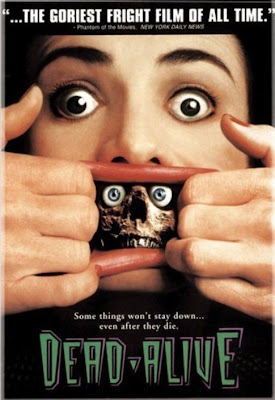 If ever a movie turned gore into an art form, surely it is Peter Jackson's cult classic Dead Alive (1992) (known as Braindead in its native New Zealand). Yes, Lord of the Rings fans, I'm sure you'll be relieved to know that the creator of your favorite nine-and-a-half-hour epic movie series was dabbling in the splatter film before he became a mainstream hit-maker. Dead Alive revels in the ecstasy of excess.

Jackson and co-writers Stephen Sinclair and Fran Walsh lovingly pay homage to the George Romero zombie classics (also, they're apparently trying to top Lucio Fulci, the director of the Spaghetti splatter flick Zombie, in terms of blood and guts, which they do, and with a much keener sense of humor than Fulci). But their story also has more than a bit of Psycho's bad pop psychology: a timid, simpering man named Lionel (Timothy Balme) lives with his crotchety mum (Elizabeth Moody), who dominates his life. When she is bitten by a Sumatran rat monkey (a fairly obvious but nonetheless icky concoction of claymation) at the zoo, she starts (literally) falling apart, and transforms into a flesh-eating ghoul. It's the ultimate picture of the clinging mother devouring her son's independence.

Naturally, the mum spreads her "sickness," until soon poor Lionel, looking wide-eyed and at his wit's end, has a basement full of flesh-munching dead creatures to contend with. He tries to pacify them with food that isn't human remains (which is sort of liking trying convince children to eat broccoli when there's an ice cream sundae in the freezer), and knocks them out with tranquilizers, but nothing works long enough or sure enough. Jackson employs the use of a sleazy, money-grubbing uncle, played by Ian Watkin, who brings a large group of moronic friends to the house for a party, pushing the movie into its conclusion: an all-out zombie bloodbath. Every scenario you could never have imagined is enacted, with every household appliance and garage gadget you could lay your hands on (including, most memorably, a lawn mower, a light bulb, a blender, and garden shears).

Peter Jackson knows how to deliver a comic-book type horror movie, one which never takes itself seriously. The characters are the stuff of old melodramas, caricatures who serve their respected archetypes as Jackson pulls everything together with blood-drenched glee. This obviously isn't everyone's cup of tea, but it's a ridiculous, audaciously horrifying black comedy for those who are game. With Diana Penalver, Brenda Kendall, Stuart Devenie, and Jed Brophy.
by Jacob Lusk @ pannedreview
Email ThisBlogThis!Share to TwitterShare to FacebookShare to Pinterest
Tags 1992, Peter Jackson