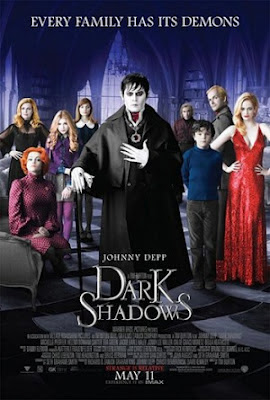 Dark Shadows is the concoction of writer Seth Grahame-Smith, someone with an unoriginal imagination: he wrote Pride and Prejudice and Zombies and Abraham Lincoln: Vampire Hunter, and now sinks his teeth into a comic re-imagining of the 1970s Gothic soaper. That not even director Tim Burton could inject any life into this massive heap is a testament to Smith's lumbering script.

Poor Johnny Depp, who has played every weird, pale character in filmdom at this point (almost always under Burton's watch, incidentally) is propped up on screen to try and sustain this mess for two hours as he, playing vampire Barnabas Collins, fumbles his way through 1972 Maine, trying to adjust to the culture shock. (He's a vampire who's been in the ground, chained inside a coffin, for nearly 200 years, thanks to the curse of a conniving witch who's in love with him.) When Barnabas gets released from his deep slumber, he shows up at the family mansion and makes plans to improve the Collins name, which has fallen out of fashion in the town which owes its very existence to the once great Collins clan. Nor is the family business, a fish cannery, successful any longer, having been usurped by a clever competitor, the witch from 200 years back (Eva Green), sustained in her youth and beauty by dark magic. Too bad she couldn't work some magic with this movie. It's abysmal, and you start to wonder how in the world everyone botched it so badly.

Whenever they don't know how to make a scene interesting, or even remotely energized, the makers of Dark Shadows insert some overplayed 1970s song, whether it means anything at all to the context or not, and this is meant to remind us how cool the 70s were, or how cool this movie is for recognizing how cool the 70s were. And usually Depp's character makes some kind of bemused observation to remind us that it's supposed to be funny that he's been displaced. Anachronistic wit at its most subtle and original.

The problem with Dark Shadows is that it doesn't know how to be a movie. Everyone has a lot to say, but nothing that moves the story along as much as one would hope. Exposition clutters the film, clunkily making itself known at every turn. Nobody seems sure how to tell this film's back-story succinctly or cleverly. Nobody seems sure how to get the plot moving succinctly or cleverly either. Smith is apparently fond of dialogue, but he doesn't have the garish sense of gab of someone like, say, Quentin Tarantino, whose talky movies are usually interesting because of what's being said, and also because of who's saying it, and how they're saying it. The actors in Dark Shadows haven't been given enough good material to really shine. And nothing interesting or original is happening in the first place.

Michelle Pfeiffer looks fetching, and she's still got the ability to command the screen, but Burton and Smith turn her into a deflated hag. She lumbers through the movie just like Smith's screenplay and hasn't anything all that interesting to do or say. She's the current representative of the Collins family and estate (along with her no-good brother, played by Johnny Lee Miller.)

With Helena Bonham Carter who is, not surprisingly, given nothing interesting to do, as the alcoholic live-in headshrinker. This film is as anachronistic as its character. It's a movie in search of a story, and the creators hoped that a lot of fancy set design and big stars and bad jokes (all of them seemingly aimed at getting into the movie trailer, which they did.); Bella Heathcote appears as a young woman who goes to the Collins mansion to be the new governess. (Her character gets ignored for much of the movie, which suggests that she is a character of convenience, contrived merely to stir up Depp's passion for his long-dead lover, whom she resembles.) Watch The Addams Family, or Beetle Juice, instead. With Jackie Earle Haley, Chloe Grace Moretz and Gulliver McGrath as the two children in the house, and, in a cameo appearance, Christopher Lee, who is also used for no good reason.
by Jacob Lusk @ pannedreview
Email ThisBlogThis!Share to TwitterShare to FacebookShare to Pinterest
Tags 2012, Christopher Lee, Eva Green, Helena Bonham Carter, Jackie Earle Haley, Johnny Depp, Michelle Pfieffer, Tim Burton