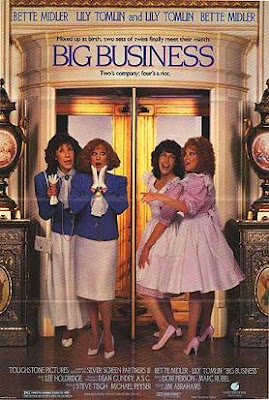 Big Business (1988) stars Bette Midler and Lily Tomlin as two sets of mismatched twins. One pair grows up in New York City, and now run the conglomerate started by their father; the other grows up in West Virginia, raised in a rural community that relies economically on a nearby factory and its jobs. So, when the factory, which is owned by the New Yorkers, is threatened in a liquidation deal with an Italian investor (Michele Placido) who's planning to shut it down, the West Virginia girls head up to the Big Apple for a showdown, not knowing that their enemies are their long lost sisters.

Without its cast, Big Business is a fairly limp comedy that fails to amount to anything surprising or novel. This plot has been done before at least a handful of times (going all the way back to Shakespeare and The Comedy of Errors), including with Gene Wilder and Donald Sutherland in the French Revolution comedy Start the Revolution Without Me (1970). Bette Midler and Lily Tomlin generate most of this movie's appeal: When she's playing a domineering capitalist, Midler is sensational. She looks like she's having fun, and Tomlin gets overshadowed as the spacy sister who's out of place in the big city. (She was born to a humble West Virginia farmer and his  wife, who, from the few minutes we see of her at the beginning, must have died from the sheer exhaustion of bearing too many children.) She's felt out of place her whole life, just like the Midler who's grown up in the country, not knowing she had city life in her blood.

One of the problems of Big Business is that it gets sidetracked trying to think of ways for its four main characters not to run into each other. The four of them end up getting booked at the Plaza in neighboring hotel rooms, so director Jim Abrahams milks the mistaken identity plot line for more than it's worth. Abrahams uses the crusade against a giant corporation which threatens to destroy the economic means of a small town as an afterthought, a way to give the movie some kind of moral impetus, not to mention a sappy finale that will unite the girls who are so different from each other. It's probably the most obvious part of the movie (but might also be the reason it was such a crowd-pleaser.)