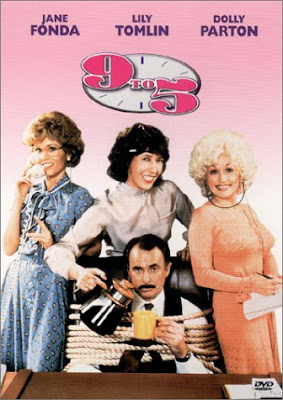 9 to 5 was one of the movies I watched incessantly as a child. What red-blooded American boy wouldn't want to watch a workplace comedy about three secretaries played by Lily Tomlin, Dolly Parton, and Jane Fonda? Watching it now, I'm apt to be a bit more critical of it, but it's very hard not to like the three leads, who work well together. If you're even remotely aware of movie history from about 1968 to 1979, you'd be surprised to see Jane Fonda, the Oscar-winning star of Klute and The China Syndrome, and, for a time, the most hated celebrity in America (because of her anti-Vietnam sentiments and her subsequent journeys to Hanoi in the early 70s), so subdued, so easily forgotten amidst her co-stars. Surely no actress was more capable of making a big impression in a movie about women's rights than Jane Fonda.

Fonda gets overshadowed by Lily Tomlin,
who has an amazing air of confidence when it comes to doing funny scenes, and she seems to be completely in touch with her character and her character's frustrations about having to deal with a sleazy boss, Mr. Hart (Dabney Coleman), who passes her up for a promotion in favor of a man with less experience. Fonda is pinched and cold and unappealing until her character loosens up mid-way through, but even then she's already established as sort of the drag of the three. Dolly Parton, in her film debut, has a natural amiability that shines through her performance as Hart's good-natured assistant. Unbeknownst to her, Hart's been spreading rumors about them, and she has accrued the reputation of "office slut."


One problem is that most of 9 to 5's comic suspense is generated by a very contrived, easily avoided, mistake. (This was something that rendered the more recent comedy The Hangover absolutely ineffectual as a believable comedy.) Tomlin's character accidentally puts poison in Mr. Hart's coffee (the box oh-so-closely resembling his favorite artificial sweetener), and when he falls and hits his head, she mistakenly assume he's been poisoned by the loaded beverage, and proceeds to steal a corpse, which believes to be that of Mr. Hart, from the hospital. She ropes the other two girls into her panicky misadventure, and this sets up the progression of the rest of the movie. There are funny moments, and as mentioned before, the three ladies are fun to watch, but all of this seems contrived, on a sitcom level. And there are so many ways 9 to 5 could have avoided such a mistake.

Nevertheless, it's a fun comedy that has found its way into the pop culture memory bank. At any rate, Parton's song, "9 to 5," is remarkably catchy and still fun to listen to, and she even adapted the film into a Broadway shot several years back. Directed by Colin Higgins. With Sterling Hayden, Elisabeth Wilson, Henry Jones, Lawrence Pressman, Marian Mercer, and Peggy Pope.
by Jacob Lusk @ pannedreview
Email ThisBlogThis!Share to TwitterShare to FacebookShare to Pinterest
Tags 1980, Colin Higgins, Dabney Coleman, Dolly Parton, Jane Fonda, Lily Tomlin