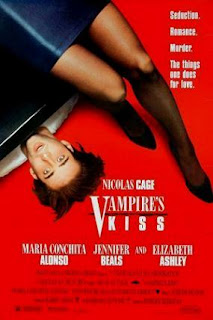 Vampire's Kiss (1989) deserves its own wing in the bad horror movie hall of fame. Nicolas Cage, perhaps in a moment of panic after the success of Moonstruck (1987), delivers a chaotic performance that is a mixture of hammy amateurism and overwrought method-acting. The end result is still bad, enthusiastically wretched. He plays a yuppie who think he's becoming a vampire after he meets a mysterious woman at a night club and takes her home with him. He then proceeds to terrorize his poor, pathetic secretary, Maria Conchita Alonso. It occasionally reminds you of George Romero's eerie vampire film Martin (1978), although that movie was far more subtle and interesting. Nonetheless, this may be the most important work of Nicolas Cage's career.