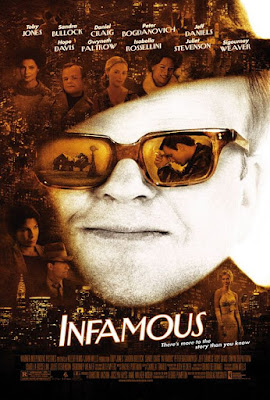 Infamous (2006) is the story of Truman Capote's experiences researching and writing In Cold Blood (1966), a novelistic account of the brutal murder of the Clutter Family in Kansas in 1959. As Capote, Toby Jones gets pretty close to a perfect imitation of that unforgettably sissified voice of Capote's. He exudes the enigmatic mixture of gaudy, flamboyant, brashness and furtive shame and vulnerability that characterizes our perception of Capote. The movie portrays essentially two Capotes: the one who held the attention of any social gathering with his gossip about celebrities, and the one who poured himself into his work, a book which made him and destroyed him simultaneously.

As Harper Lee (called Nelle by friends), Sandra Bullock is good. (Most people probably know that Harper Lee and Truman Capote were childhood friends, and that Lee based the character of Dill in To Kill A Mockingbird on Capote.) The trouble with Sandra Bullock is that she's a big star, which is okay if all you want from her is Miss Congeniality, but her persona, the fact that she's so well-known, gets in the way of of her more serious performances. There's a sort of barrier between the audience and her. She managed to break the barrier with a blonde wig and a Southern accent in The Blind Side, and in Infamous she just about decimates it with a subtler Southern woman performance. She's humble and plain in Infamous; she's centered and quiet and careful when it comes to what she says and how she says it: the polar opposite of Capote, who possesses a keen ability to turn a phrase or sling a sarcastic retort; his advantage is being able to win people over with his cleverness. Hers is her lack of pretension.

One of the most interesting things about Infamous isn't its exploration of a possible attraction between Capote and one of the killers, Perry Smith (portrayed by Daniel Craig, who didn't seem to me to look right for the part, but who turned in a convincing performance nonetheless). Rather, what's fascinating is the understated way the movie glimpses into Harper Lee's career. She never wrote another novel after To Kill A Mockingbird, although she did start one, eventually putting it away out of frustration. Her success, I think, eclipsed Capote's in the long run (probably because her novel was far less morally ambiguous), even though he had a more prolific career than her. And we get a sense of the things Harper Lee might have been thinking about such sudden and dramatic success upon a first novel, and about the subject of a writing career in general. In fact, those moments in which Infamous examines the whole world of writing are when it shines the brightest. It's got some maudlin, made-for-TV sentiments that it pulls off with measured success, but those moments are cheap compared to its portrayal of the loneliness of writing. It's a striking movie, one that captures the precariousness of human security, the prisons people put themselves in, and the shams people enact to avoid whatever is painful in their lives.

Capote's New York entourage includes Sigourney Weaver, Hope Davis, Isabella Rossellini, Juliet Stevenson, Peter Bogdanovich, Michael Panes (as Gore Vidal), and John Benjamin Hickey. The other killer, Dick Hickock, is played by Lee Pace, and Jeff Daniels plays the the lead investigator in the small Kansas town where the murders occurred. There's also a stunning opener with Jones and Weaver at a night club where Gwyneth Paltrow performs a snazzy love song with a backdrop of stars that feels positively dreamy, in a manufactured sort of way, the way those old romantic comedies from the 1950s feel. It doesn't exactly fit with the rest of the movie, which alternates between drab and dusty Kansas and the swinging Manhattan social world, but tips in favor of gloominess rather than glamour.