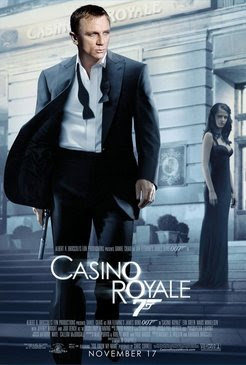 Daniel Craig adds new layers to the James Bond character without sacrificing the allure of 007, the man's man who keeps himself in shape and the villains in check. The difference between Casino Royale and pretty much every Bond film prior is one of temperament. This is a serious movie that tries to be realistic and character-driven. Casino Royale has a sense of humor that compliments its serious plot, rather than the cartoonish quirkiness that so often helped implode the previous Bond movies. (Not that some of the other Bond movies aren't a great deal of fun. Some of them are classics, or at least have classic moments, such as the wonderful Egyptian section of The Spy Who Loved Me).

It's also nice to see a plot that isn't Cold War-driven. After seeing enough of them from Connery to Brosnan, you start to wonder if these movies aren't anything more than sugar-coated propaganda pieces trying to make Western culture appear virile and tough.


Instead, Casino Royale tackles the next soon-to-be-exhausted (if it hasn't been already) criminal activity du jour, terrorism. There are plenty of action sequences to sate the palate of any James Bond junkie. What's more fun are the poker scenes at the casino where Bond matches wits with a seedy terrorist investor, and the interplay between Bond and a fellow secret agent (Eva Green), although Green herself isn't all that memorable, and is at times far too fragile. You start to yearn for a tougher heroine. (There have been a few in the past, if memory serves).

Casino Royale has its weak points, too, however. It rumbles along for nearly two hours and thirty minutes, and while there are memorable scenes, by the end you feel you've been pommeled just as much as the hero, who incurs a considerable amount of physical damage. But Craig's performance and the movie as a whole are strong, seeing this series off to a successful and hopeful reboot when it appeared nothing fresh could be offered.