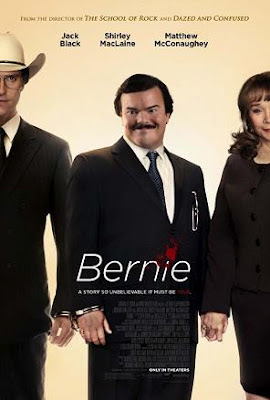 In Bernie, Jack Black plays a prissy funeral director in Carthage, Texas, named Bernie Tiede (pronounced TEE-duh), whose charming ways win over the town's meanest (and richest) little old lady (Shirley MacLaine). The two form an unlikely bond which becomes increasingly more unbalanced when she makes him the sole inheritor to her vast fortune, and he becomes, in effect, her slave, expected to be at her beck and call. Then one day, Bernie snaps: he shoots her in the back four times, hides her body in the deep freezer (where she remains undetected for nine months), and tells the whole town she's in a nursing home recovering from a stroke.

Director Richard Linklater, who co-wrote the screenplay with Skip Hollandsworth, has crafted an uproarious black comedy, which is part mockumentary, part documentary, and part Southern-fried small-town drama (complete with a courtroom climax). Matthew McConaughey, who always shines best in character roles even though he's usually cast as the lead, plays the cocky, self-aggrandizing, and determined district attorney who's gunning for Tiede. The rest of Carthage, it seems, refuses to believe that Bernie is capable of such a horrendous crime, and after Bernie confesses, the crime itself becomes subject for re-interpretation. After all, she was a vicious old crone, and not even her own relatives had anything to do with her.

Black is stunningly good. He turns his voice into a window into the nature of his character, allowing bits of insight with every effeminate vocal inflection and every exasperated sigh and every repressed bit of emotion. His interpretation of Bernie is of a man who must live behind the prison of niceness. He can't reveal what he really thinks about anyone or anything; he showers people with gifts and flattery, using the crotchety widow's money for all kinds of charitable donations and contributions to the community. But under what motive? We're left to wonder how much he really cares about people, and if perhaps he just desperately wants to be accepted.

The film gets a tremendous amount of production value from its cast of local townspeople, playing themselves: very, at times, stereotypical Southern characters, and yet surprisingly endearing (and always funny, whether intentionally or not), and never afraid to speak their minds. They turn this into a sort of real-life version of one of those Christopher Guest mockumentaries, with the one difference being that this movie isn't intending to make fun of them, even though there are many moments where we laugh at their turns-of-phrases and their blunt ways of speaking. It's more of a laughing with than a laughing at, I suppose. Maybe a little of both.

Shirley MacLaine gets lost in all this. She's a famous face attached to a character that could have been played by anyone. Given MacLaine's acting abilities, you yearn for her to do more than be a cold bitch. She doesn't linger in the mind as anything more than a broadly imagined caricature. She's kept in check, which for her can often elicit a better performance (as in In Her Shoes), but in this film, she turns into almost a blank screen, a still, lifeless object on the wall, propped up to make Jack Black's character, who's already garishly conspicuous, stand out even more. There are moments where we get a little spark out of her, but she's just not given much to do. I suppose we can be grateful to see her on the screen, but wouldn't it have been nice if her part had been fleshed out? Even still, the movie's a howling good time, more so if you can laugh at the horribleness of life, which it encourages us ever so naughtily to do.
by Jacob Lusk @ pannedreview
Email ThisBlogThis!Share to TwitterShare to FacebookShare to Pinterest
Tags 2012, Jack Black, Matthew McConaughey, Richard Linklater, Shirley MacLaine