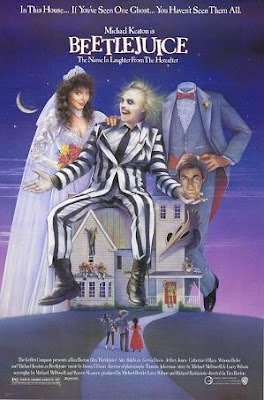 The creators of Beetle Juice (1988)--it was conceived by Michael McDowell and Larry Wilson, scripted by McDowell and Warren Skaaren, and directed by Tim Burton--must have grown up on a healthy dose of EC Comics, The Addams Family, and B horror films. This was Burton's second film (following 1985's Pee-wee's Big Adventure), and it remains his most imaginative comedy, a dazzling display of creativity and ghoulish humor that could have been concocted by the likes of children's author Roald Dahl if he and Stephen King were both writing a book together, on acid.

The plot, for those who haven't seen this, involves a self-employed married couple (Alec Baldwin and Geena Davis) who are trying to enjoy their vacation in their large Connecticut house, until a tragic accident leaves them dead, newly inducted in the afterlife, and confined to their house as prisoners. This wouldn't be so bad, except an obnoxious New York couple (Catherine O'Hara and Jeffrey Jones) buys the house, and the wife proceeds to remodel it according to her decidedly abstract artistic tastes, with the help of an eccentric interior decorator named Otho (Glen Shadix), who's also interested in all things paranormal. The ghosts find a friend in the NYC couple's depressed teenage daughter, Lydia (Winona Ryder), whose natural attraction to dark things allows her to see them when almost no one else can.

While Beetle Juice is obviously the product of minds that were immersed in all things macabre and darkly funny, it doesn't feel derivative. Its unusual story continues to develop in unexpected directions, and the cast creates amusing, eccentric performances that make this purely fun, not weird or off-putting. Baldwin rarely played likable guys until his wonderful performance on the television show 30 Rock, but in Beetle Juice he's sort of an easy-going guy who's not trying to snow anybody in. Geena Davis, with her puckered face and her dark, curly hair, looks very maternal. O'Hara generates an almost kinetic weirdness with her performance as the fruity stepmom, who's devoted to her "art" (tacky-looking abstract sculptures that look like enlarged, black insects).

And Michael Keaton, as the bio exorcist hired to scare the new family out of the dead couple's beloved home, gives new meaning to the term "loose cannon." In Batman, Keaton was completely overshadowed by the performance of Jack Nicholson as the Joker. If it weren't for Beetle Juice, we wouldn't have known how insane Keaton can be. It adds such a delightful comic side to his acting abilities that almost every performance afterward is tainted, imbued with a tacit reminder that "this is the guy who played Beetle Juice."

There are few movies as original as Beetle Juice, and out of all the comedies to come out of the 80s, this one ranks as one of the most enduring and enjoyable. Also starring Robert Goulet and Dick Cavett. Music by Danny Elfman, the lead singer of the 80s rock band Oingo Boingo, who has composed the scores of every Tim Burton film.
by Jacob Lusk @ pannedreview
Email ThisBlogThis!Share to TwitterShare to FacebookShare to Pinterest
Tags 1988, Alec Baldwin, Catherine O'Hara, Geena Davis, Glenn Shadix, Jeffrey Jones, Michael Keaton, Tim Burton, Winona Ryder