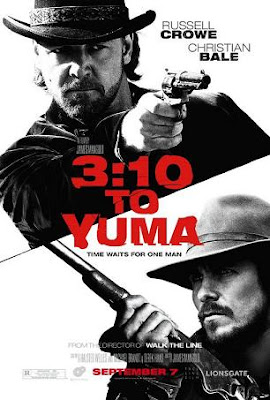 Russell Crowe and Christian Bale head the cast in the 2007 remake of 3:10 to Yuma. Crowe plays an infamous cutthroat train robber who's supposed to be evil incarnate, and Bale is the stubborn rancher, struggling to feed his family, who agrees to help transport him to a train station bound for the Yuma, Arizona prison. I haven't seen the 1957 original, which starred the always forthright Glenn Ford, and Van Heflin, but this re-imagining is a first-rate Western. It's trashy good fun, sustained by Crowe's inability to be unlikable. He's the kind of dream villain who's tough enough to be intimidating but not dastardly enough to kill a kid or anything like that.

The director, James Mangold, maintains a sort of controlled brutality that works because there's an ironic side to all this: the archly drawn characters poke fun at the old model of good guys vs. bad guys. Granted, there's nothing new in this, but the movie doesn't make a point of being too clever or self-impressed about it. We're allowed to enjoy the play-acting. This is probably the best sham Western I've seen.

This movie offers itself up as some kind of hero-worshiping wish fulfillment. Bale's character wants to be a hero to his sons again. After losing a foot in the Civil War, he feels reduced to something less than a man, and he sees this moment as an opportunity to improve his image. You find yourself laughing at this delusional reasoning. It fuels all the drama of the movie. Westerns have always contained an element of wish fulfillment. They have so often encapsulated an obsession with masculine power and domination. The outlaws, the Indians, and the elements become the Western hero's three obvious antagonists.

The actors are mostly well-cast. Ben Foster, as Crowe's right hand man, achieves a kind of creepy comic book style performance. He's disturbingly devoted to Crowe, and the moment he comes on screen he's commanding your attention. As a performer he restrains himself for the most part, and lets the creepiness really sink in and populate all of his scenes in the film. Peter Fonda does good work as a determined old codger working for the Pinkerton guards Crowe and his gang attacks in the beginning. He's go the vibe of a John Carradine: he's done this before. Vinessa Shaw seems anachronistic as a saloon keeper Crowe beds early in the film. She just looks too modern, even with authentic-looking costumery. She doesn't look, for instance, as convincing as Katharine Ross did in Butch Cassidy and the Sundance Kid.