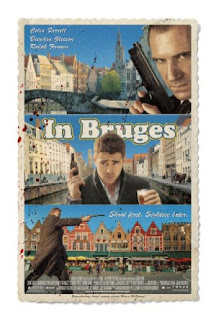 Two hit men await orders from their boss about their next job, in Bruges, Belgium. Writer-director Martin McDonagh maintains a droll sense of humor that sustains the movie through its dark subject matter, and turns it into something remarkably like Shakespeare. Colin Farrell and Brendan Gleeson play the hit men. Gleeson is cultured, wise, measured, and careful, and Farrell is cocky, questioning, and bored with the sights of Bruges. In fact, it becomes a running joke that he will be stuck in Bruges forever.

The supporting cast is eclectic and gives the movie a trippy other-worldliness: there's the live-wire of a boss, played by Ralph Fiennes, who turns swearing into art. There's an American dwarf actor (Jordan Prentice) who's filming a movie there, as well as a duo of crooks (Clemence Poesy and Jeremie Renier) who specialize in stealing money from tourists after luring them into their apartment.

Farrell has perhaps never been more appealing than in this role, because his cocky facade is easily shattered to reveal a weak, scared man who isn't really up to the line of work he's chosen. And Gleeson becomes oddly philosophical as events turn toward the fatalistic. But it's the humor that really works for In Bruges. It would have been a maudlin piece of camp otherwise. Instead, we get something really quite stunning; a smashingly twisted crime serio-comedy that refuses to stay within the boundaries of clearly defined genres. ★★★★
by Jacob Lusk @ pannedreview
Email ThisBlogThis!Share to TwitterShare to FacebookShare to Pinterest
Tags 2008, Brendan Gleeson, Colin Farrell, Ralph Fiennes