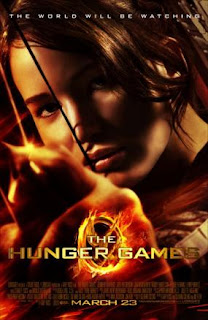 In The Hunger Games, there are 12 districts of a larger country which must endure a yearly punishment where their rebellious deeds are "remembered" (so they will never rebel again) in a contest called "The Hunger Games." A boy and a girl from each district (that's 24 adolescents) must fight to the death in the wilderness. That means one winner, and 23 dead. Enter our heroine, Katniss, played by Jennifer Lawrence (not so far from the character she played in Winter's Bone).

I haven't read the books. Not planning to read the books. In fact, I felt predisposed to dislike The Hunger Games, because it's the latest book-to-movie series obsession. But, to my surprise, I enjoyed it.  It's an engrossing adventure, with a good adult supporting cast that includes Woody Harrelson, Stanley Tucci, Elizabeth Banks (barely recognizable under piles of make-up and gaudy-looking attire), and Donald Sutherland.

People will likely be scratching their heads about a story in which children are pitted against one another and turned into beasts, but the movie shies away, perhaps a little too much, from the dehumanizing effects of the Hunger Games. They were trying desperately to ensure a PG-13 rating, I'm sure, but in the process I think the point of the story is rendered more than a bit murky. We, the audience, are supposed to be indicted for our role as spectators getting our kicks out of violence. This is merely an amped-up version of those Gladiator fights from the Roman days, you see. The Hunger Games are telecast for all to watch (there are cameras everywhere, hidden even within the trees), and each player receives a tracking implant that lets the government monitor his or her every move.

It's much more rewarding to think of this movie as mindless entertainment than to try and tease out a moral message or some kind of Orwellian warning about the future. All of its ideas are rehashes of other people's ideas, simply put into the world of juvenile fiction, a world which is highly profitable, as even adults are getting into these books. The movies themselves will serve as a nice summing up for those of us who aren't planning to read them.

The Hunger Games's futuristic leanings may be designed to elicit deep contemplation, but they don't. The movie's too tame for that. While I wasn't exactly drooling for more violence (there was certainly a lot implied, so they could have turned this into a real bloodbath had they wanted to), the tameness has a way of luring you back into the complacency which the movie is, I think, trying to rail against. The future is for the spectators. They don't care about kids turning into monsters, killing each other. They want only to be entertained. Oh, but it comes at a price, a high, high price! This is the inner-monologue we're supposed to be having as we watch The Hunger Games, and then I suppose we're supposed to walk out of the theater with the realization that the future is now.

It was interesting to see how the movie (and presumably the book as well) recycled the decadent fashions of years past. You see spectators sporting colorful hair, done up in elaborate and unique fashions, and the clothes are equally loud and garish looking. Apparently everyone in the future (at least, in the big cities), is going to be a metrosexual. The poor folks still look like good old-fashioned working class, adorned in drab-looking, practical clothes. The Proletariat never get the fashion forward. They feel all too real and of the moment, which was probably the intention.

Also, the technology is fun to think about--lots of fancy computer screens flashing everywhere, and some impressive developments in the genetic manipulation of the natural world (often used to give the government a more active role in the creepy fight-to-the-death game that ensues for most of the movie).

The world of futuristic fiction is a strange one. There are so many ways an idea can go wrong when one is trying to depict the future. You look at 2001: A Space Odyssey and you see how inaccurate were their imaginings of what technology would be like in 2001. In fact, the set-up to this kind of movie can really kill it. You might start to giggle or possibly frown if you think too much into the futuristic world carved out for the drama of The Hunger Games. But it delivers enough suspense to be a fun movie, and there are enough moments of drama to make the main characters real and sympathetic, despite the situation that continues to dehumanize them.