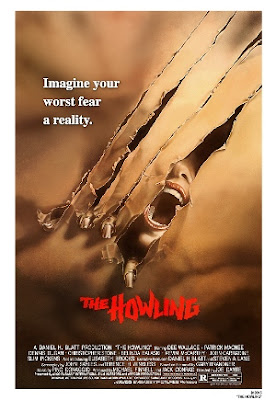 One of three werewolf movies to come out in 1981, The Howling has all the visual qualities of a vividly remembered nightmare, but it never lets horror get in the way of its canny sense of humor. It has all the makings of a good late-night horror flick--replete with scenes of ghastly werewolf transformations that are still pretty impressive. Like An American Werewolf in London, which came out the same year, the physical special effects leave a brazen impression much more so than computer-generated effects. Half the fun comes in watching how the filmmakers manage to manipulate the scene to convince us we're watching a human undergo a horrifying mutation.

However, as clever-looking as the movie is, and as amusing and pulpy as it tries to be, it never builds up to a strong finish. Its attempt to critique the sensationalism of television journalism is unfocused because it's trying its level best to be a werewolf movie at the same time.
And moreover, The Howling is never as exciting or thrilling as you'd like it to be. There's a great deal of "atmosphere," but something about it feels artificial, and in the end you feel like you're trekking into the territory of a filmmaker who isn't all that attuned to how to make a horror movie tick. The film's sense of humor is obvious and at the same time very niche, so only devoted horror movie fans are likely to get all the genre references (half the characters' names pay homage to 1950s horror film directors).

Dee Wallace (E.T.) heads the cast as Karen White, an L.A. reporter who witnesses a traumatic encounter with a serial killer, and heads to a secluded therapy retreat with her husband Bill (Christopher Stone) to try and recover. Of course--and we saw this coming--the place is overrun with werewolves. (We've seen this before: they were witches in Rosemary's Baby and robots in The Stepford Wives, etc.). Dee Wallace is an interesting case: she's worked most memorably in the horror and scifi genres, usually playing somebody's mother (as in E.T. and Cujo). But she isn't being used to her full potential in this movie. Director Joe Dante doesn't let her fall back on her natural comic abilities as much as other directors have, and he seems determined to present her as a drag, and the least interesting woman in the film. The bewitching werewolf queen Elisabeth Brooks seduces her husband, presumably because he's tired of her being a drag. And her newsroom pal, played by Belinda Balaski, is far more energetic and loose in front of a camera. Of course, Wallace's character is overcoming the traumatic experience of encountering a serial killer/stalker/sexual predator at a dirty movie theater, so she's understandably rattled. But this was an unappealing characterological move, especially for an actress like Dee Wallace, who's normally plucky and fun to watch: instead of making her strong, she's a blank canvass. Sigourney Weaver raised our expectations for what a woman could do in a horror movie situation, and Wallace's character is sort of channeling Mary Richards, the newsroom gal from The Mary Tyler Moore Show. Weaver would have kicked werewolf ass, severely, and even Mary Richards would have been smart enough to get the hell out of there sooner. Dante keeps a tight reign on this woman in order to keep his movie on his track. Everything happens to Karen White. She is a totally reactionary heroine. Her character never develops or grows, and the result is a stilted performance from an actress who's capable of much more than that. 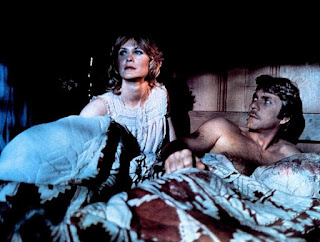