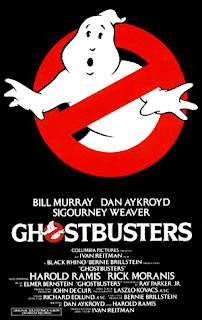 The performers in Ghostbusters (1984) are better than the material. Bill Murray and Sigourney Weaver have a fabulous chemistry, especially in the scenes where she's possessed by a centuries-old spirit, making advances toward Murray, who reacts with a wonderfully sarcastic indifference. Murray's natural comic abilities are the anchor of Ghostbusters. Dan Aykroyd and Harold Ramis are constantly trying to catch up with him, but it's not because they aren't talented. Aykroyd plays the easily excitable Raymond, and Ramis is the uber-scientific, stiff, humorless Egon. The three of them are paranormal investigators who, after being ousted from a cushy research post at New York University, set up operations in an abandoned fire station. They're a sort of 911 service for supernatural emergencies. They have bizarre-looking paraphernalia: lasers that somehow trap the ghosts with their beams and confine them in an airtight box. It doesn't make a lot of sense, but then again, how could it?

The film relies on at least two montages to carry its story, which is never a good sign. (It was a common tack of comedy films of the 80s and 90s, and has become a cliche.) Much like in Caddyshack, which Harold Ramis co-wrote and directed, and Murray co-starred in, you get the feeling that the filmmakers didn't have enough form to their ideas. And while Caddyshack has the mark of improvisational comedy that works for it, Ghostbusters could have used a little more structure to tighten some of the loose ends. It doesn't have the right build-up to it that it should have as a strong comic-horror film. Instead, there are grabs at ideas that sometimes work and sometimes don't. Fortunately, the cast lifts the material up.

Sigourney Weaver is a standout because she's such an imposing force as an actress. The crime of this movie is that so many great actors are short-changed. Annie Potts, as the blase secretary, injects her own brand of droll humor in her scenes, but they aren't as many as you'd like them to be. And Rick Moranis plays a likeable chump, an accountant who's got the hots for Weaver's character, his neighbor. When he becomes possessed by a spirit, he's absolutely terrific, acting like a stoned klutz. Directed by Ivan Reitman. Written by Aykroyd and Ramis. The idea was apparently conceived by Aykroyd to be a vehicle for he and Saturday Night Live co-star John Belushi.

As a movie, Ghostbusters is uneven. There are some wonderful comic moments, such as a scene where Murray conducts a test on two college students to determine if they have psychic abilities, and uses it to hit on one of them, an attractive blonde co-ed. One of the other stand-out moments is the afore-mentioned encounter between Murray and the possessed Weaver, who's loose and wickedly funny because she's finally allowed to do something than play the straight woman. At other times, the jokes are hopelessly juvenile and detract from the stronger parts of the movie.