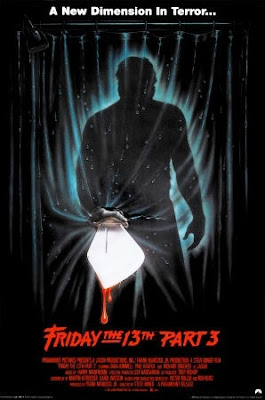 The good thing about watching any of the Friday the 13th films is that you can clean your house while the movie's on, come back to the movie intermittently, and not feel like you've missed anything crucial.

In Friday the 13th Part 3 (1982), which was originally released in 3-D, the name of the game is delayed gratification. The writers (Martin Kitrosser and Carol Watson), apparently feeling no obligation to use their imaginations, decided instead to protract every murder sequence to the point of insufferable tedium. Like Friday the 13th Part 2 (1981), this one begins with footage from its predecessor, just in case we had absolutely no idea what was going on. Afterwards, the movie opens with the butchering of a cartoonish slob and his nagging wife. Not only are these unappealing, uninteresting characters, but we are forced to spend an unbearable ten minutes (which seem much longer) watching them wander around their dilapidated house and its attached grocery store as Jason waits for the right moment (and means) for a gruesome double-slaying.

Finally, the real story starts, but by then you feel impatient and annoyed, and the bad acting and bad dialogue of the group of adolescents en route to Crystal Lake for a nice long weekend fails to alleviate either of these sentiments.

What is always so disappointing about this series is its lack of imagination and moreover its refusal to be fun. Horror movies must have both of these ingredients to be successful, and for some reason no one ever felt them necessary to the success of the Friday films. Everything about this movie cinematically is a tease. The cinematographer (Gerald Feil, who worked on several other slasher films), relies on his knowledge of previous horror movies: lots of shots from the killer's point-of-view, lots of long pans toward the intended victims, lots of false alarms. But there's no suspense. No one has bothered to pull us into this story because no one cares about there being a story. And I suppose the only reason people see these movies is because they know what they're getting.

It would have been financially imprudent to offer up something new when it had worked, financially, twice before. This also explains why the acting is so bad. Amy Steel, the heroine of Friday the 13th Part 2, was at least a passable lead, and far more convincing than Dana Kimmell, our current heroine, or Adrienne King, the survivor of the first Friday. The supporting cast is mostly equally embarrassing, although the playful banter between one of the couples is occasionally funny (mostly it's forced and idiotic). Steve Miner, who directed the previous entry, must have run out of ideas somewhere before finishing Part 2, because Part 3 makes the others look better by comparison.

The ideas Miner and the writers do try fall flat because they haven't been thought through enough. They're clumsily constructed imitations of scenes from better movies. It's as though the filmmakers have seen the best films about young people from this era (Breaking Away, The Warriors, Rock 'n Roll High School, etc) and tried to conjure up a fraction of their charm or passion. One example is the scene where a motorcycle "gang" accosts two of the adolescents at a grocery store. The female biker initiates the conflict by snatching their money, and the two male bikers physically threaten the boy, whose spine is made of jelly, making him an easy target. When he and his friend get back to their car, he accidentally backs over the motorcycles, inciting an unintentionally comical outburst of rage from one of the gang members. The scene has no credibility. The bikers are thugs for no other reason than to stir up a little manufactured conflict. (This scene is also a poorly contrived way to further the body count, because you know the bikers are going to get it when they pursue the teens back to the lake.) The kids feel heroic for backing over the bikes, and this little scene is supposed to win us over. Even if it had worked, it would have been a brief hiatus from this movie's 90-minute-long career of boring its audience to death.

The bad performances would be funny if this movie were going for a campy feel, but because the movie takes itself so seriously, the acting registers as simply uninteresting. I think dullness is the real offense of these movies, much more than their objectification of people as bodies to be slaughtered. How can boredom be so successful at the box office?