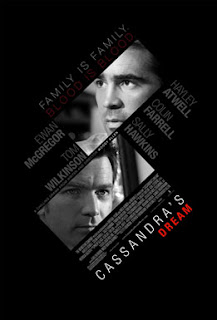 In Cassandra's Dream (2007) writer-director Woody Allen aims for something along the lines of Greek tragedy in the modern world: Two brothers (Ewan McGregor and Colin Farrell) are hired by their rich uncle (Tom Wilkinson) to rub out one of his business associates who's going to testify in court against some apparently damning illegal activity. But the consequences are far graver than they imagined.


A feeling of dread comes over you about midway, when the brothers' choices start to develop into their repercussions. McGregor's character, Ian, becomes corrupted (almost entirely but not quite) by his own ambitions, and Farrell's, Terry, begins to fall apart because he can't live with the guilt, and moreover, the sense that he has upset some kind of moral balance for which he must atone.

Cassandra's Dream makes a point of giving us an insightful look into human drama, the irony of life. Ian's girlfriend (Hayley Atwell) is an actress, and once while she's performing on stage, her character says this, that life is ironic. Of course the play is not accidentally talking about the theme which runs throughout this movie, and of course the reference to the Greek character Cassandra is important as well. But I'm wondering at what cost.

This movie was just depressing. The performances are all delivered by competent, effective actors. Sally Hawkins is remarkable as Farrell's girlfriend Kate. Farrel; may resort to the same tricks to convey his angst (twisting his face, raising his voice up an octive, all the things that made him really stand out in In Bruges), but he's good. Surely no actor was better when looking panicked and guilty.
You feel for Terry much more than Ian, McGregor's character.

McGregor maintains his usual level of poise and self-assurance. I'm not sure exactly, but I believe one of the reasons I enjoy Ewan McGregor is for his banality. There's something consistently measured, controlled, calculated, in his performances. He's always a calming agent, and this makes for a contrast and a foil to Terry's weak, unstable constitution.

But the movie doesn't give you much enjoyment for all its important-ness and its references to stock literary conceits and characters. It's too much like life to be an entertainment. How long can you admire good acting when you're depressed, and part of you regrets starting the movie in the first place because you were in the mood for something else? Woody Allen is certainly not expected to confine himself to romantic comedies (his comedies have always been so much darker anyway, dwelling on the ironies of life as they do), but in the case of Cassandra's Dream, I felt ready for it to be over well before it was.