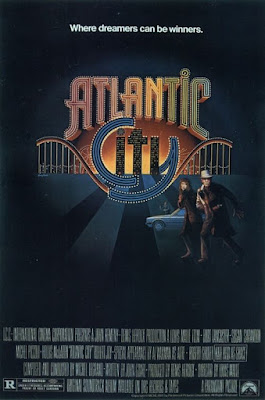 A flunky named Lou (Burt Lancaster) who works for a rich old widow accidentally comes into possession of some cocaine when he meets the ne'er-do-well brother, Dave (Robert Joy), of a casino dealer-in-training, Sally (Susan Sarandon). Lou sees this as one final opportunity to become the sexy tough guy he never was. He becomes drunk on the perceived power of being an effective criminal. But he's a high-functioning drunk who's too old and too careful to make the stupid mistakes of someone young like Dave, whose dearth of caution does him in.

Atlantic City (1981) is one of those movies that leaves you feeling unmoved, unless you find its characters appealing. Lancaster is much like Art Carney's character in The Late Show: a has-been whose power lies chiefly in the fact that nobody takes him seriously anymore. Lancaster is confident and still a convincing lead even in his mid-sixties.

Kate Reid also turns in a strong performance as Grace, the crotchety but still sexual old broad he takes care of. She's given moments of grace and subtlety that elevate her character from the cartoonish way she's presented at first. We see a softer side, a manipulative side, a needy side, a bitchy side, a humorous side, and a tough side. In fact, this may be the reason Atlantic City has been considered something of a great movie by some people.

The director, Louis Malle, and the writer, John Guare, manage to show us different sides, different angles, of their characters, in their relationships with each other. Like Grace, we get a different Lou when he's with her, with Sally, with Sally's brother, with the career criminals in Atlantic City, and with the old chum he runs into giving shoeshines in the hotel washroom. And it's easy to see how this film helped Susan Sarandon's career take off. Sarandon possesses a radiant confidence mixed with tender vulnerability. She's a fiery actress who you believe totally, and who you can like almost immediately. She's soft without being weak, and tough without coming off as as drag.

But the movie itself feels a bit like a tease. My sensibilities and the movie's sensibilities are both trashy but in different ways. I can revel in the pulpy deviousness of film noir, but the world of Atlantic City casinos and drugs and old flunkies high on the allure of their own streaks of good luck leaves me feeling disinterested. And the setting is grim: Atlantic City doesn't seem like a place anybody would ever want to live in, let alone visit. I suppose that was the film's purpose: showing us why people would see Atlantic City as their version of a silver lining, just as faded and fleeting as all the other silver linings. This movie combines the Hollywood dreams of the 40s and 50s with the feeling of waking up to the cold hard world of economic decline in the 70s and early 80s. Atlantic City hasn't the allure of Las Vegas, which is just as artificial but a lot more glamorous. By the end, you don't even worry much about what will happen to Lancaster's character, although the ending is still pleasing.
by Jacob Lusk @ pannedreview
Email ThisBlogThis!Share to TwitterShare to FacebookShare to Pinterest
Tags 1981, Burt Lancaster, Kate Reid, Louis Malle, Robert Joy, Susan Sarandon