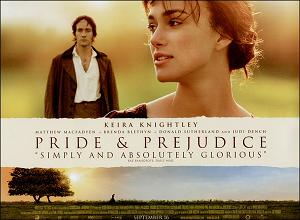 First, The Sociopolitical Rant Part of My Review:

I have never really tried to understand people's obsession with Jane Austen. Most of the Austen-philes have probably seen the myriad television and film adaptations of her six novels and the occasional few have actually read some of them. I remember reading Northanger Abbey in college because it was a spoof of Gothic novels. Reading Pride and Prejudice for the first time opened up my eyes to why Jane Austen is so popular. Of course, I should have seen this coming: it's the same reason any contemporary romantic comedy is popular. Pride and Prejudice affirms the marriage cult.

And now the review of Pride and Prejudice (2005 version):

Fluttery piano music wafts in and out of the movie. It's layered over the soundtrack whenever director Joe Wright doesn't know how to develop the emotions of the moment (be they happy, sad, confused, angry, indifferent, or anything in between). So the piano music is there to tell us how to feel.

And there's a smattering of overtly cinematic camera angles and dissolves that are placed to try and elevate this comedy of marital bliss into something else. I think it would have been fine as social satire had they stuck with the source material, but overall, the 2005 movie is banality come to life. Keira Knightley is very pretty indeed, but who could believe her performance as Elizabeth? She's too pretty. Rosamund Pike is an actress I enjoyed very much in An Education. She plays Jane fairly well, but then, Jane's a bit of a bore. She never has much time to stand out. Matthew Macfadyen scowls appropriately as Mr. Darcy.

Pride and Prejudice is for people who need to keep alive the mythology that marriage is the only way to be happy or fulfilled, and moreover that marriage is the supreme business of women. When you read Jane Austen it's rather interesting partly because it's not so anachronistic as it appears to today's audiences, but also because Austen was fairly good with the words and all. The movie flattens everything out so that satire and irony have been omitted. The only remaining levity is built in for the mass audience in the most insulting fashion. And everyone is too pretty, not just Elizabeth, to be believable (except Donald Sutherland).