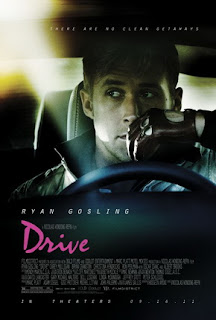 First-rate. It exists in some kind of alternate universe that's a mishmash of now and the 80s. Drive (2011) has a lusciously compelling pull to it--a sort of poetically violent dream set against Los Angeles, which never ceases to be a place of intrigue on the screen. Ryan Gosling plays a stunt man who makes money on the side as a getaway driver. He gets involved with his neighbor and then, when her husband is released from prison, agrees to help him get some mobsters off his back by knocking off a pawn shop. Things go awry.

What struck me most about Drive was its dreamlike quality. It envelopes you under a lulling canopy of cinematic comfort--fast-paced car chase, romantic suggestion, a subdued tension between the main character and everyone else, as though he doesn't really belong--and this almost soothing layer yields to dappled rays of violent energy riveting throughout. Gosling's character--he's known only as The Driver-- seems completely dulled over by the things he's done and seen, and yet he has heart. He's not in it for the money, but out of an almost antiquated sense of heroism. He's trying to protect a woman and her young son from heartless thugs. But he brutalizes himself in the process of trying to protect Innocence.

Drive has sparse dialogue. This is refreshing in a world where most movies have nothing to say and confirm this with an incessant barrage of mindless chatter. In Drive, the actors are forced to convey much with few words. Facial expressions, deliberate pauses that turn into drawn-out silences, all become far more telling, and more fascinating, than what could be accomplished by lots of talk. What's said has greater weight because there's less fluff to the dialogue. It's economical.

And the music (by Angelo Badalamenti)--it's deliciously synthesized. This is where Drive feels like it came out of the 80s. But the music isn't corny or over-the-top. It acts like an incubating sheen over the film--and over the audience--imbibing you, massaging you into this movie's unusual balance of calm and chaos.