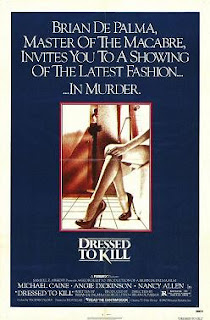 Brian De Palma's most lascivious thriller (with the possible exception of Body Double), Dressed to Kill (1980) shamelessly explores the transgressive nature of human sexuality and the propaganda side of horror movies that depict sex as a death wish. One woman's spontaneous tryst gets her slashed to death in an elevator by a platinum blonde murderess, and a high-class prostitute witnesses the slaying, positioning herself as both prime suspect and prospective victim.

De Palma structures the film like a bad dream, pulling the viewer into a voyeuristic session of gender-bending cheap thrills. But the whole thing's an intentional tease: the murderess with her cheap wig and black trenchcoat and shiny razor is a comical fright figure impersonating a truly terrifying menace, and the victim is punished twofold for having an unexpected affair with a stranger she meets in a museum: she finds out he has a venereal disease (too late), and then meets her death minutes later.

It would be too easy to dismiss De Palma's work entirely as ripping off Hitchcock, because De Palma always explores a different side. He uses similar conventions of plot and theme as Hitchcock but there's always a sort of cinematic irony underneath what he's doing, as though the joke is that he's turning Hitchcock inside out.

The Pino Donaggio score is appropriately grandiose--it's the symphony of a grand love scene, full of highs and lows and subtle ironies and dramatic swellings that punctuate the set pieces, turning them into sudsy, sensationalistic camp. You'll either revel in its majestic hyperbole or feel indifferent to it all.