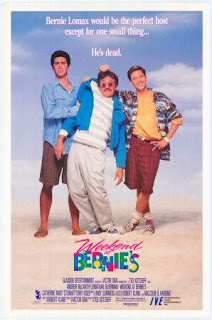 Sitcoms work because the contrived circumstances in which the shallow characters find themselves take only 25 minutes to be worked out. Most sitcoms are garbage, and don't resonate with the audience or linger in their consciousness (I'll single out a few exceptions: Seinfeld, The Mary Tyler Moore Show, and 30 Rock, all come to mind as great sitcoms that developed characters you actually cared about or at least loved to hate/laugh at.) The problem with so many movies in the last thirty or so years is that they're just elongated sitcoms (the not good kind of sitcoms): the characters never move beyond the surface level, their motivations are unbelievable or uninteresting; the humor is predictable, and really isn't even funny.

As an audience, we feel nothing for these kinds of movies. They may satisfy some urge for banal entertainment that's been conditioned inside us by studios that want to make as much money as possible on as little quality entertainment as can be managed without alerting the public. There's no investment for the audience. That's the problem of a movie like Weekend at Bernie's (1989), the plot of which is like watching a balloon deflate for 90 minutes instead of 12 seconds. It's about two yuppies working at an insurance firm who are trying to ingratiate themselves with their sleazy boss, Bernie. They discover that someone is trying to defraud the company, but when they share this information with their boss, he decides to have them killed (he was the one perpetrating the fraud, it turns out). Bernie's plan backfires, because he winds up dead at the hands of the mob thugs he's in cahoots with, and the two yuppies are set up as the fall guys. A recipe for madcap hilarity, indeed.

Except, this movie has no charm, there's no moonlight in the soul of this movie. It lacks the opulent glittery magic of a sudsy 1950s comedy, or the fast wit of a 1930s screwball comedy, or the chaotic brilliance of some of the more recent comedies of note, like Bridesmaids. The leads are played by Andrew McCarthy and Jonathan Silverman. McCarthy has the ability to be likable, but in this movie he's the opportunistic ladder-climbing type: overly obsessed with materialism and getting laid (an ideal yuppie). Silverman is more endearing: his pouty face works for him, and he seems exasperated by yuppie culture but unable to make a move away from it. There's something interesting in that. But then he ruins it by trying to impress a girl (the lovely Catherine Mary Stewart) by misrepresenting himself. That makes this some kind of 1980s film version of Two and a Half Men.

I think the real problem with Weekend at Bernie's is that yuppies aren't all that funny. They're actually kind of pathetic. They'd be tragic if they were more likable. Incidentally, there's a funny episode of Seinfeld where Elaine watches with great agony Weekend at Bernie's II, which apparently makes the first film look like a cinematic gem. With Terry Kiser and Don Calfa. Directed by Ted Kotcheff.
by Jacob Lusk @ pannedreview
Email ThisBlogThis!Share to TwitterShare to FacebookShare to Pinterest
Tags 1989, Andrew McCarthy, Catherine Mary Stewart, Jonathan Silverman