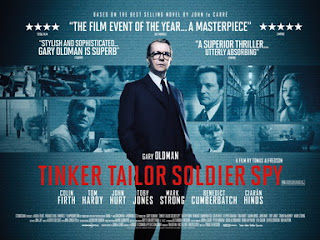 The anti-Bond spy movie, from the book by John Le Carre. Gary Oldman plays Smiley, an ex British intelligence agent who's called back on the job when his former boss (John Hurt) suspects the presence of a mole in his department. You have to go into this expecting a deliberately paced movie that doesn't spoon-feed you the whole plot. It's not action-packed. It's not about the sexy gadgets and unbelievable action sequences, but the withered perseverance of an aging spy who may not be sexy or hyper-masculine, but makes up for that in sheer intelligence and mental fortitude. It would have been nice, I suppose, if this movie had been a little faster paced at times, and there's a certain Britishness to it that reeks of stuffy good manners, and yet the movie is totally absorbing, even when it's difficult to follow. It has an actual mystery to it, which is something you generally don't get from a Bond picture. And Gary Oldman is a convincing lead, a bit embalmed perhaps, but he gets his character's human side across nonetheless.

Benedict Cumberbatch makes a strong impression as Oldman's right-hand-man, the scrappy assistant who knows how to get information without getting caught. Tom Hardy is also an interesting character, a spy who allegedly defects and becomes a target of British intelligence as a result. Colin Firth is one of the higher-up members of the British intelligence agency. He's good, but maybe it's only because we've come to expect good performances out of him that we don't demand proof of his acting talent. He's our new Laurence Olivier.

Tinker Tailor Soldier Spy lacks that little spark that might have elevated it to a great piece of entertainment (like David Fincher's Zodiac or Curtis Hanson's L.A. Confidential), but it's still a convincing movie, if too carefully constructed for its own good. Visually, it's a remarkable movie, capturing the gloom of England and Cold War Europe. It's one of the few movies in recent memory that looks believably set in an earlier time period than the present. The Cold War paranoia is alive and well in this movie, and perhaps it's the fact that the Cold War is now more than 20 years ended that Tinker Tailor Soldier Spy is worthwhile because of its seeming irrelevance. It goes down easier than something about more recent (or current) global conflicts, because we feel like it's behind us. But the shadowy phantoms of Tinker Tailor Soldier Spy have a way of lingering in your mind after the movie's ended, and even if you feel a bit dazed from the overlength, you appreciate that this movie doesn't insult your intelligence or pander to your emotions in some infantile fashion--the way we're used to being treated at the movies.