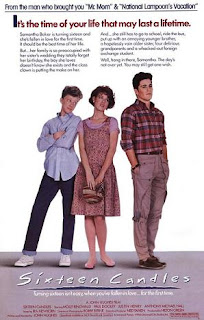 For my first review of 2012, I wanted to revisit one of my favorite 80s movies, Sixteen Candles (1984). It's basically Cinderella turned into an 80s high school melodrama. The movie is utterly unreal, and that's where its charm lies. Molly Ringwald plays Samantha, a girl who exists in the middle--she's not popular, but she's also not unpopular. The movie takes place over a 24-hour period, wherein Samantha's entire family forgets her sweet 16, and she falls for the high school prom king, Jake Ryan (Michael Schoeffling), who's already dating the "perfect" girl (Haviland Morris).

In addition to her own personal problems, Samantha must deal with the advances of a determined geek named Ted (Anthony Michael Hall), who hides his insecurities behind a facade of mock-macho-self-aggrandizement. Hall's performance is terrific, and so is Ringwald's. Writer-director John Hughes had an incredible talent for casting young actors and eliciting believable performances from them that deepened the characters and made them endearing to the audience. So, while Sixteen Candles is a completely unreal fairy tale of a movie, its characters feel nuanced. They're fleshed out beyond their stereotypes, and become people you care about.

The humor is at times unsustained, but overall Sixteen Candles feels like a wonderfully fun late night: it breezes along without taking itself too seriously (like Hughes's follow-up, The Breakfast Club, did). Movies that take place in virtually 24 hours must have a vitality to them in order to be convincing. Sixteen Candles works, despite its shortcomings.