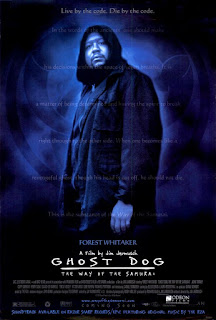 Forest Whitaker plays a hitman who's known affectionately and yet with a certain amount of trepidation as Ghost Dog. He has a "gift" for effecting successful and stealth contract killings. However, when his latest job doesn't turn out exactly the way his clients wanted, Ghost Dog becomes a target of a bunch of aging mafiosos. They're relics of the golden age of mobster movies, men who were probably pretty tough in 1972, but who are now slow and fat and wrinkled and have raspy voices and dulled reflexes. Ghost Dog lithely eludes their labored attempts to confront and kill him.

Whitaker turns his character into some kind of a deadly teddy bear. He's into samarai literature and philosophy, and reading in general, and his best friend (played by Isaach de Bankole) is a Haitian immigrant who only speaks French and drives an ice cream truck. When Ghost Dog--whose real name is withheld from us--meets a bright young girl named Pearline in the park, the two strike up an unlikely friendship that, while brief, proves to illuminate a great deal to us about Ghost Dog's character. He and she seem to exist in completely other worlds from their Jersey City surroundings.

Ghost Dog is devoted to the code of the Samarai, and everyone around him is oblivious to the idea of living by any code whatsoever, except for the mafiosos, who are on borrowed time in their chosen profession. You start to laugh at the ridiculousness of overaged men still trying to be badasses. It's meant to be comical, and when the light bulb suddenly clicks (there are no younger dudes with guns in this group--it's the world's first geriatric mafia), you realize that this movie is going to be fun. It's deliberately slow-paced, but the camera work by Robby Muller is arresting: the atmosphere of Ghost Dog leaves one feeling on edge, but there's a fluid lull to the imagery that keeps you glued to the screen. There's something almost unspeakable about the feel of this movie. It's akin to the film's wryly funny and yet touchingly reverent view of its main character, who's some kind of criminal religious figure with almost mystical sensibilities.

The action is exciting, in part because the director, Jim Jarmusch, doesn't overload the movie with shootouts. And he's very subtle about them. Those scenes creep up on you when you don't expect them, and while there are touches of brutality, nothing is handled humorlessly: you're always conscious of the fact that this movie doesn't take itself too seriously. It's a mystical, breezy crime thriller: something of an anomaly, perhaps, but quite a good piece of entertainment, sustained by Whitaker's fine performance.