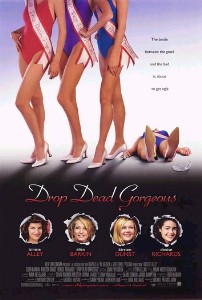 A small-town beauty pageant in Minnesota is the focus of this dark comedy, filmed in a mockumentary style that's only halfway committed to being a mockumentary. Its characters are the stuff of small-town stereotypes: gun-shooting beauty queens with raging tempers and bloated egos. Kirstie Alley plays the pageant's spokeswoman. She's a former queen herself, and she's vying for the success of her daughter (the always wickedly beautiful Denise Richards) in the upcoming show. But a nice girl (Kirsten Dunst) is in the way because she possesses some actual talent.

Drop Dead Gorgeous (1999) gives you an admittedly fun cajoling of beauty pageants and the obsessive people who participate in them, as contestants, judges, commentators, or spectators. But the story itself isn't sustained the way Best in Show (2000), which may be the best mockumentary ever made, is. Instead, the makers of Drop Dead Gorgeous seem lazily content to rely on their self-perceived cleverness for noticing the outlandish stupidity of their all too easy target.

It's the actors who save this movie from fumbling too badly. Particularly Allison Janney, who plays the best friend of Dunsts's mom (Ellen Barkin). Janney's character is a deliciously uncouth small-town trailer park goddess, and Janney, who is a beautiful, tall, talented comedienne, seems to be having more fun than just about anyone else. Kirstie Alley is good, but somehow frightfully believable. Some of the dark humor is disturbingly dark, and yet, this is what gives the movie its edge. Contestants keep meeting with macabre deaths, and other "accidents" indicate that someone's trying to fix the voting process. But without the black comedy, I don't think this movie would have had any teeth.