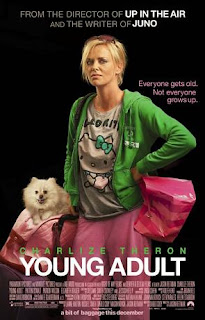 Young Adult is like a reunion of Fast Times at Ridgemont High entwined with a comedic reworking of Fatal Attraction. Charlize Theron plays Mavis Gary, a semi-visible ghost writer of a popular teen fiction series. She decides to return to her hometown ostensibly to write what will be the final book in the series, but in reality she's returning to woo her high school sweetheart, Buddy (Patrick Wilson).

The movie is funny in the first half, and amusing in an aimless way. For a while, Mavis is an appealing anti-heroine because she's quirky, irreverent, and a drunk. Theron's acting is much more interesting after her character has tossed back a few shots of Maker's Mark. But as she descends more and more into her obsession with getting back her now married ex, who's just become a father, the movie derails, making you realize that there isn't much of a movie to begin with. Just a thin veneer of a story, hatched seemingly fifteen minutes before the director, Jason Reitman (Up in the Air, Juno), yelled, "Action."

One bright spot is the performance of Patton Oswalt, playing Matt, a former high school classmate of Mavis, whom she ignored during their adolescent years but who now assumes the role of a sarcastic sidekick, pouring sour grapes over Mavis's quixotic quest to rekindle an ideal that probably isn't as great as she remembers it.

What I can't understand is why Reitman and screenwriter Diablo Cody couldn't figure out some more interesting things for Patrick Wilson to do. He's got a great comic streak and he's commanding enough to be a strong presence in any story, but here he is wasted. In fact, a lot of this movie seems to be lost in a sea of missed opportunities for the actors. Theron's performance is okay, but she could have been better. She's drunk in most of the movie, and while (as mentioned earlier), the booze makes Mavis more interesting, it also makes her less appealing as a lead.

Young Adult seems like a movie made for Cameron Diaz. Theron is too other-worldly. She's cold and distant. It's very difficult to care about her. She's crazy and self-destructive, and Wilson's character seems so content with his new domestic life that Mavis's plan as would-be homewrecker has no guts: it's an empty bag which she's left holding at the end of the movie. And Cameron Diaz could have pulled off the girl-next-door turned career-girl with ease. (And it might have made up for Bad Teacher).

Just finished watching this movie. Wishing I'd read your review first. What a waste.

It was a real bummer of a movie, wasn't it?