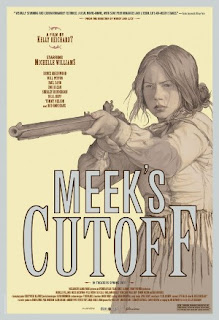 Meek's Cutoff (2010) is about a harrowing journey along the Oregon Trail. The party of eight is lost, and their supposed guide, Stephen Meek (Bruce Greenwood), doesn't have a clue where they're going (although he tries to maintain the illusion that he's leading them to the promised land). It's a demystified Western. The cowboy isn't the hero, the Indian doesn't miraculously know English or save the day, and most of the characters are impotent.

As impressive and admirable a picture as this may be with its sparseness and economy and gritty realism, it's more a test of endurance than a piece of entertainment. It works out like a short story you read without feeling anything. Michelle Williams's performance comes through but only because her character is written to be the strong one. Everyone else is practically mute.