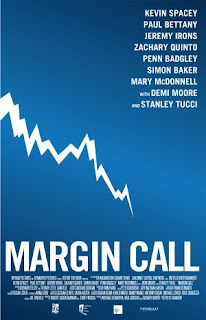 Margin Call takes place over about a 24-hour period in which a New York investment bank foresees the impending financial crisis of 2008 and tries to save itself, effectively screwing over everyone else in the process. Kevin Spacey heads the cast as a middle man who grapples with the morality of selling out at the cost of so many other companies' very existence.

It's a grimly keen assessment of Capitalism; a lovely little tragic-comedy full of lonely figures in business suits trying to hold on to as much of their money as possible. All the business-world jargon that confuses most of us in real life sputters out of the lips of the characters in this movie with irony: half the time no one knows exactly what is meant by "volatility index" and the like. You keep waiting for the movie to translate it for you. Even the big boss (Jeremy Irons) asks for plain English when a meeting is called to discuss how to deal with the storm that's brewing.

This movie humanizes the business world and dehumanizes it at the same time. It placates the idea of class warfare by suggesting how infinitely culpable every one was in the economic downturn that continues to problematize our money matters here and abroad.

It's a tight, compelling little economics thriller with capable performers in front of the screen. There's no maudlin sympathizing with the Wall Street types. Director J.C. Chandor apparently prefers to appear objective. While that's seemingly impossible to do, in the process, he keeps the movie's subject from lending it a sense of self-importance. The fact that it takes place in one brief period (virtually a day and a night and the following morning), gives the movie a sense of urgency. It's a slick move, like something out of a bad Western, and you can only appreciate the fact that Chandor wasn't trying to make this the Godfather of Wall Street movies.

As a result, what we've got here is a pretty damn good movie. Spacey is wonderfully good. Zachary Quinto, as an intelligent young employee who has a mind for numbers (he's got a doctorate from MIT to boot), shows promise. He was a good Spock in Star Trek and here he demonstrates his ability to play other types of characters. Demi Moore is restrained, and therefore pretty good, as one of the higher-ups. Simon Baker too plays his character--one of the bosses--with a sleazy passive confidence. With Paul Bettany, Stanley Tucci (showing a remarkable screen presence in his brief but important role), Penn Badgley, and Mary McDonnell.