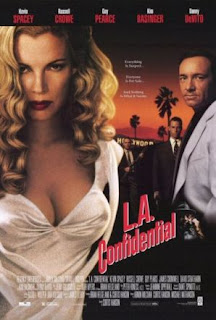 L.A. Confidential (1997) is the definitive modern pulp noir. Set in 1950s Los Angeles, it's about the decaying power of corruption in the police department. This is the kind of movie you experience with sheer glee, because it taps into the very base, gritty, sensual pleasures and fascinations that make movies such fun: murder, sex, blackmail, corruption, and ambiguous characters who simultaneously defy and embody the good guys vs. bad guys theme. In fact, L.A. Confidential is so gritty and seedy, that by the end you feel dazed. The movie punches you in the gut. But what elevates the material, transcending the whole genre of pulpy thrillers of which it is very much an homage, is the humanizing of the main characters.

Russell Crowe, as the brute force member of the LAPD, Bud White, is astonishingly good. He seems to be all macho energy--an invaluable asset when it comes to intimidating suspects--but he's vulnerable too. Crowe looks like someone who would throw people through windows and take a girl out to the movies in the same day, and he's well cast in the role. It was one of the movies that made him a star. He thrives in parts like these.

Kevin Spacey seems to be having a wonderful time as the cop who courts Hollywood. He's a creative consultant for a hokey TV cop show, and it's where he lives. Spacey is so effortlessly good that he's probably overlooked amidst the more dramatic roles. When he and Guy Pearce are having a heart to heart and Pearce asks him why he became a cop, he doesn't give a long speech about some traumatic childhood experience that imparted within him a lifelong desire to see justice served. Instead, all he says is, "I can't remember." It's delightfully antithetical to the cliched soliloquys so many movies (even this one at times) resort to, the kind that generally end up in little blurbs for the Oscars, to showcase a performance. It's impossible to characterize an entire performance in one 30-second clip, and Spacey is living proof of this.

What strikes me about L.A. Confidential is how creepy it is. The corruption is so believable, and flies so squarely in the face of the mythology about Hollywood and the 1950s, that you find yourself feeling genuinely at uneasy. The movie taps into our underlying fear and distrust of authority figures. It asks: How do we know that they have our best interests at heart? More frightening--what if they do, but are willing to break the law to carry out their own brand of justice? Like the corrupt police chief played by Orson Welles in Touch of Evil, playing God with a badge becomes an intoxicating drug. Sooner or later it's uncontrollable, and it never remains untainted by corruption, greed, and vanity.

L.A. Confidential recalls real murder cases that have fascinated us for decades. It's based on the book by James Ellroy, who in part became a mystery writer because he was so affected by the gruesome, still-unsolved, murder of his own mother. The story inadvertently conjures up images of the Black Dahlia case of 1947, which of course happened in L.A. only a few years before the events of this movie. Most closely connected to that story of a would-be actresses' brutal murder is the thread in L.A. Confidential about a call-girl agency, run by a sleazy millionaire (David Strathairn). He fixes up girls to look like movie stars. He has a 'Rita Hayworth' and a 'Lana Turner' and a 'Veronica Lake' (played by Kim Basinger, the only actor in the movie to win an Oscar, and probably the least deserving person in the movie of all, even though she's not bad). Veronica Lake, it should be noted, is best remembered for playing dames in grimy B movies. It's pure enjoyable trash, and one of the great films of the 1990s.

With Danny DeVito as a smut-peddling journalist who writes for a Hollywood gossip magazine called Hush Hush, Simon Baker, and James Cromwell as the police chief, Dudley Smith, an almost mythological creature. He seems to see through a person's soul, and he's a sly, dark mastermind with a hacky Irish accent. He's absolutely terrifying. ★★★★