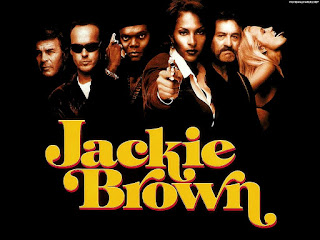 Pam Grier's belated tour de force. The tall, ravishingly beautiful Grier was the Queen of Blaxploitation in the 70s, appearing in such films as Coffy (1973) and Foxy Brown (1975), the latter of which I recently reviewed. Grier's acting has only gotten better over the years. She seemed wasted in Foxy Brown. Her acting wasn't forceful enough to grab the movie and take charge, but by 1997, and perhaps with the help of a director who respected her as an actress (Quentin Tarantino), she was ready to make her career performance.

As the title character in Jackie Brown, Grier is confident, strong, vulnerable, and always in control. Her character, Jackie, is an airline stewardess who works on the side for an illegal arms dealer named Ordell Robbie (played with relish by Samuel L. Jackson). Once she's pressed by the police to rat on Ordell, he decides it's time to silence her for good. But Jackie manages to take control of the police and Ordell with a "sting" operation she masterminds, somehow convincing both sides that she's working for them.

Jackie Brown is usually not the first movie people mention when citing their favorite Quentin Tarantino film. It's not as flashy as Pulp Fiction or as offbeat as Kill Bill. But in its controlled, sustained mission to tell a good story, Jackie Brown is a success. The characters who populate this movie's world are delightfully good at being bad. Jackie may be the least guilty, but her calculated mastery of circumstances seemingly designed to squash her, indicates a strong will and a genius for working situations to her advantage--it's something she's bottled up inside all her life, waiting to be let loose. The director sets all this into motion--these unstable characters and their greedy motivations--and we get to watch it unravel.

The reason people enjoy Tarantino's movies is that he enjoys ripping off the gritty, low-budget crime and action flicks that he grew up on. But because Tarantino seemingly started off as a filmmaking rock star, he's been able to get big money productions made (or at least, modestly big productions compared to the slapped-together-with-spit B-movies of the 1970s), with popular actors. Hollywood likes to think of him as their part of the effort to acknowledge low culture. But Tarantino improves on much of the material he seems to have canonized in his own mind. If you go back and watch Foxy Brown, you'll see a movie that's not very exciting for all its action: the fight scenes are staged ineptly, the acting is unimaginative (even Grier seemed like she couldn't find her footing), and it all boils down to a strangely unappealing revenge fantasy. Jackie Brown isn't really out to get even. She's just sick of being kicked around by a system that has nothing for her but condescension. (One of the cops implies that she ought to be grateful for her measly 16,000 dollar-a-year job).

Somehow, Tarantino takes the material he fell in love with and transcends it. His movies are a glossy imitation of something cheap and poorly done and generally available only in bootlegged form. There were movies like Ilsa, She-Wolf of the S.S. and the blaxploitation movies like Foxy Brown and Cleopatra Jones and Shaft, and car-chase movies like the energetic Dirty Mary Crazy Larry (which we see on a television in Jackie). All of this has been internalized by filmmakers like Quentin Tarantino, and the tropes of those genres have resurfaced in his movies and the movies of directors like him (such as Robert Rodriguez), and audiences are either re-experiencing something to which they attach a great deal of nostalgic value, or are simply getting a kick out of these "low" movies. (Jackie Brown cost 12 million dollars but made 72 million at the box office).

Jackie Brown emerges as Quentin Tarantino's best movie, I think, because of Pam Grier and what she brings to the film. Her performance is controlled but not robotic, and she knows how to be funny, and how to lubricate her sentences with profanity (and Tarantino the writer knows how to write juicy dialogue). Grier and Jackson make for a wonderful anti-duo. Jackson slips into his role with such ease. He's dangerous but appealing at the same time.