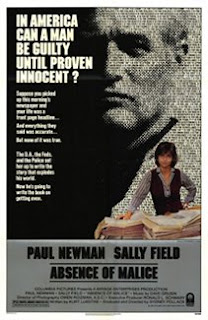 A semi-bland newspaper story set in Miami about a scrappy young reporter (Sally Field) who's set up by her boss (Bob Balaban) to leak a story about Paul Newman's alleged involvement in organized crime. Newman is the entire movie here. Twenty-five years into his career he hadn't lost the ability to carry a picture. Field is moderately successful at playing a woman who's too focused on getting a story to care about how it might affect the lives of ordinary people. Balaban plays with a rubber band incessantly. It's supposed to make his character seem more real but it serves as a distraction. Melinda Dillon plays Newman's best friend, who is deeply affected by the story put out about Newman (She can provide an alibi, but it would cost her her job and her sense of community as a good Catholic girl: she was getting an abortion.)

At its best, Absence of Malice is a fairly absorbing drama, but somehow it's never as compelling as you'd like it to be. The stakes never seem high enough. Directed by Sydney Pollack. The script is by Kurt Luedtke. With Wilford Brimley, Luther Adler, Barry Primus, and Josef Sommer.
by Jacob Lusk @ pannedreview
Email ThisBlogThis!Share to TwitterShare to FacebookShare to Pinterest
Tags 1981, Bob Balaban, Melinda Dillon, Paul Newman, Sally Field, Sydney Pollack