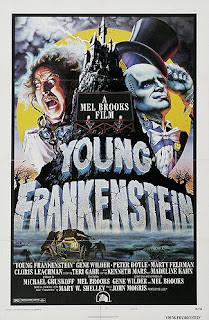 The line between horror and comedy is tenuous, which is why so many horror films unintentionally enter into the domain of comedy. The straight horror film's mission of terrifying the audience frequently fails because the audience proffers a new, reverse-mission onto the film: to engender heckling and laughter. This is, perhaps, why Mel Brooks' Young Frankenstein (1974) is still so funny. It tells the straight horror story, but allows its over-the-top nature to reign freely.

Gene Wilder, whose performance would be criticized as too much in a serious film, suddenly becomes nothing short of magnificent. He possesses an energy that few actors can summon, and turns Victor Frankenstein into a live wire: a mad genius obsessively devoted to science and to his "creation," a reanimated corpse. He becomes endearing within seconds of that first scene, in the lecture room, where he corrects a taunting medical student on the pronunciation of his name, which he has changed to "Fronk-en-steen." He doesn't want to be linked to his famous ancestor, the original Dr. Frankenstein.

What's interesting about that scene--and indeed, the entire movie--is how much effort the director, Mel Brooks, and Wilder himself (who co-wrote the screenplay with Brooks) invest into recreating the look and feel of a 1930s Universal monster classic. The black-and-white cinematography, the antiquated sets--many borrowed from the original movies themselves, John Morris's beautiful music score, all work toward creating a legitimate representation of those films. It's in the process of carefully reconstructing the elements of the classics that Brooks and company turn every convention into a gag, pointing up (and out) the humorous side of horror. The humor has always been there, but was de-emphasized by the "serious" movies.

Marty Feldman is one of Young Frankenstein's greatest assets. As the hunchbacked assistant, Igor, Feldman never gave a funnier performance. He's a foil to Wilder's unflinching devotion to the art of science. Cloris Leachman, who has always been game when it comes to being made-up in nightmarishly unattractive make-up and costume schemes, plays the creepy Frau Blucher. Madeline Kahn turns in a small but memorable part as Frankenstein's neurotic, repressed fiance who becomes a love interest for the Monster (Peter Boyle), Teri Garr plays Frankenstein's naive East European assistant, Kenneth Mars plays an eccentric local inspector with a fake arm, and Gene Hackman has a fun cameo as a blind man who's visited by the monster.

Young Frankenstein may be Mel Brooks' best overall film. It does "spoof" right--telling its own story and letting the humor find its way to the surface. (Even still, Brooks and Wilder and the supporting cast have taken care to drench the movie in gags of every kind, in case things weren't funny enough). It's a classic, one that I always like to watch around Halloween. ★★★★
by Jacob Lusk @ pannedreview
Email ThisBlogThis!Share to TwitterShare to FacebookShare to Pinterest
Tags 1974, Cloris Leachman, Gene Hackman, Gene Wilder, Kenneth Mars, Madeline Kahn, Marty Feldman, Mel Brooks, Peter Boyle, Teri Garr