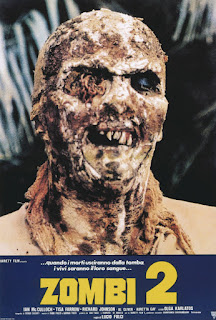 The Five Points Horror Fest is back, with another film by Italian horror maestro Lucio Fulci. Last year I had the immense pleasure of reviewing Fulci's masterpiece of incomprehensibility, The Beyond (1980), and this year I got to see Zombie (1979), which many consider to be Fulci's piece de resistance. It's certainly a piece of something.

In the poster you will notice that the title is Zombi 2. That's because when George Romero's Dawn of the Dead premiered in Italy, it was titled Zombi, so this is an unofficial sequel to that film. The two have nothing in common other than zombies. The difference between Italian and American horror movies is one of humor. Romero's Dawn of the Dead has a sharp sense of humor throughout, while Zombie is, within itself, utterly lacking in intentional humor. But the unintentional comedy is plentiful enough, because Zombie is such a painfully stupid splatter film.

Fulci sets most of the movie on a small Caribbean island where the dead are returning to life--attributed to voodoo. A reporter and a woman whose father died on the island go looking for answers, and when they arrive, they meet a doctor (Richard Johnson), who's trying to locate a scientific explanation for the zombie problem that's quickly turning all the island's inhabitants into flesh-eating ghouls. Unfortunately, the humans are just too idiotic to adequately defend themselves from creatures that, if they moved any slower, wouldn't be moving at all. And how on earth is the human body so sensitive, so permeable, that with a quick peck a zombie can rip out a hunk of flesh from an arm or a leg? It's madness, I tell you. Madness.

Tisa Farrow, a poor-man's Mia Farrow, plays the girl with a banal seriousness, and Ian McCulloch, a poor-man's Roger Moore, plays the reporter. There's oodles of blood and gore, a fight between a zombie and a shark, and plenty of bad dubbing to make the bad-movie-lover giggle with glee. And of course, being an Italian film, it's well-shot, punctuating the film with little artistic moments that are above the subject matter but somehow lift it out of the muck, if only momentarily. Pretty soon you feel numb from the gory parts, and you laugh at them, not because you're a sadist, but because it's all so dumb, so dumb indeed.
by Jacob Lusk @ pannedreview
Email ThisBlogThis!Share to TwitterShare to FacebookShare to Pinterest
Tags 1979, Lucio Fulci, Richard Johnson