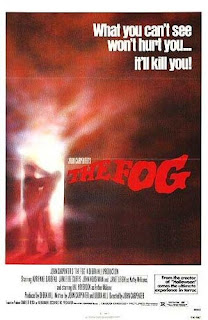 John Carpenter's The Fog (1980) may be ludicrous as a thriller, but as an exercise in creepiness, it's wonderful fun. Carpenter and co-conspirator Debra Hill had just come off the phenomenal success of their low-budget thriller Halloween (1978), so by comparison The Fog seemed tame to audiences who were by now growing accustomed to more shocks and splatter, and less patient with an atmospheric, deliberately paced ghost story.

The plot involves a cadre of vengeful spirits bent on doling out vengeance (and murky weather) to a small California town on its 100th anniversary. The founding fathers of the community apparently betrayed a group of lepers, leading them to their deaths at the bottom of the sea. Now the lepers have come back to celebrate.

Carpenter relies too much on plodding slasher-film death sequences as the film progresses, but overall it's still one of his best mood-pieces. You find yourself enjoying all the little stories being weaved together throughout the film.

Carpenter imitates two masters in The Fog: Alfred Hitchcock and Howard Hawks. The movie feels like a noirish, supernatural re-imagining of The Birds (the setting reminds you of that film's coastal locale, Bodega Bay, and the fog serves as a stand-in for the birds, creating a similar feeling of apocalyptic doom). Simultaneously, Carpenter invests his scenes with a Hawks-esque film noir feel. That feel is best developed in the scenes of the main character, a local deejay named Stevie Wayne (played by Adrienne Barbeau). Stevie sits solitarily perched in a lighthouse, from which she runs a radio station that plays old jazz standards. From the lighthouse, she has a bird's-eye-view of the whole town. As she observes the fog and begins linking it to a series of deaths, Stevie becomes a voice of warning to the community. Barbeau is perfectly cast as the heroine: she's gutsy and smart, and carries the film well, especially since she's hardly on screen with any other actors.

The Fog deflates a little at the end. The whole movie is a big buildup, layering the scary atmosphere with relish, but there's not a whole lot beneath the atmosphere. Evidently, there were attempts to punch things up by adding a little more violence to the movie after the first cut was finished, but the movie's problem isn't lack of violence but lack of a genuinely scary threat. Fog almost always adds to a horror film, but when the things in the fog are only moderately scary, fog ceases to be effective.

Most of the cast members compensate for the movie's lack of follow-through. Janet Leigh makes a good impression as a local busybody who's spearheading the town's centennial anniversary gala. Jamie Lee Curtis (Leigh's daughter in real life) returns to Carpenter-land, this time not quite as helpless as Laurie Strode was in Halloween. However, she's not memorable in this movie. Her part feels unnecessary to the story, and because there are stronger female characters around her, she fails to stand out. She's even overshadowed by fellow Halloween co-star Nancy Loomis, who plays Leigh's droll assistant in this. The two have an endearingly irritated-with-each-other relationship. With Tom Atkins, Hal Holbrook as an alcoholic priest, Charles Cyphers, and John Houseman, in a creepy bit at the beginning, giving us the town's dark secret in perfect ghost-story fashion.

It might be thinking too deeply to call The Fog an indictment of colonialism, but it certainly points out the irony of celebrating people who murdered and stole to get what they wanted.
by Jacob Lusk @ pannedreview
Email ThisBlogThis!Share to TwitterShare to FacebookShare to Pinterest
Tags 1980, Adrienne Barbeau, Hal Holbrook, Jamie Lee Curtis, Janet Leigh, John Carpenter, Nancy Loomis, Tom Atkins