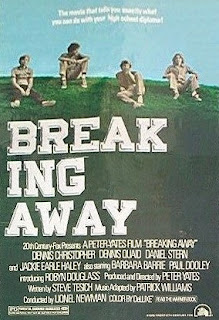 Breaking Away is a sleeper hit from 1979 about four high school graduates in Bloomington, Indiana, who have no clue what they want to do with their lives, and feel out-of-place in their own hometown in the presence of the preppie coeds at Bloomington's Indiana University campus.

Breaking Away is one of smartest, funniest, most endearing crowd-pleasers I've ever seen. It portrays life in a small town honestly, not looking down but rather looking in. The relationships in the movie are deeply layered, so much so that every time I watch this movie I discover new qualities, new facets. The main character, Dave Stoller (Dennis Christopher), is an avid cyclist who idolizes a group of Italian racers, to the point that he's become a sort of trans-ethnic-- an Italian trapped in an American's body. He speaks with a cheesy Italian accent and wears Italian aftershave, and has transformed the walls of his bedroom into a virtual shrine to Italy.

Dave's father (Paul Dooley) is baffled by his son's bizarre behavior, but won't do anything about it other than complain. Dave's mom (Barbara Barrie) doesn't mind--she gets a kick out of his active imagination because it runs against the routine of small-town blue-collar culture. She sees in Dave a sense of passion for living that she once had, a fire that died down but remains inside her if ever so faintly.

Even though the parents have aspects of caricature--the complaining, ultra-conservative father and the deferential, quiet, mother--the actors manage to turn these caricatures into human beings with depth to them. The caricatures become enhanced, fleshed out, made loveable, made credible, made acceptable and forgivable, and at the same time they end up surprising us in many ways.

Likewise, the development of the four guys--Dave (Christopher), Mike (Dennis Quaid), Cyril (Daniel Stern), and Moocher (Jackie Earle Haley)--is a richly delightful experience to watch. Quaid is a former high school quarterback who sees a dim and unfulfilling life ahead of him, Stern is the gangly eccentric, whose weird personality alienates him but also endears him to the group: At the end of the movie, after the climactic Little 500 race (which actually exists to this day in Bloomington), Cyril is the only one without someone at his side. He seems to walk through the movie slightly alone. Moocher is experiencing new romance and trying to act like an adult, even though he's short and still looks like a kid.