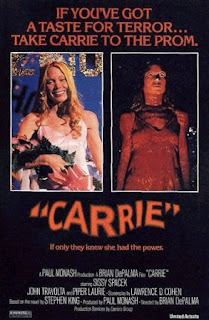 Poor Carrie White (Sissy Spacek) is the scapegoat at school because she's awkward and quiet and plain. She lives with her raving lunatic of a mother (Piper Laurie), who's such an avid fundamentalist she makes up her own damning scripture verses and then utters them with gospel fervor. On top of all Carrie's problems, she's noticing some strange behavior: she can move objects with her mind if she concentrates hard enough. It's telekinesis, and director Brian De Palma has never had so much fun with it than here. (He takes the theme and runs--in too many directions--again in The Fury).

It's interesting to note that Carrie was Stephen King's first novel, but that we really don't think of Stephen King as much as we think of Brian De Palma when we think of Carrie. De Palma had begun making Hitchcock-influenced thrillers with 1973's Sisters, and some consider Carrie to be his ultimate thriller (that or 1980's Dressed to Kill). More than any of his other thrillers, Carrie has become part of pop culture. There's something sleazy and irresistible about it.

Carrie is the outcast who simply snaps after she's been pushed too far. She's hated because she's stuck in a shell of social ignorance and otherness. But no one can really blame her for her ignorance, given her home life. In the opening scene, she panics when she experiences--rather late, biologically--the first signs of menstruation, and then pays for it when the other girls in the locker room begin hurling tampons at her. When Carrie gets home, her mother treats her like she's a harlot. Femininity is the enemy in Carrie's house, a sign of weakness and uncontrollable appetites that must be hemmed in by a rigidly dogmatic denial of pleasure.

Despite whatever it's saying about repression and fundamentalism, the movie is really just a big buildup to its grand finale, where the pig's blood prank turns Cinderella into the Medusa, and the Love Under the Stars dance into the prom from hell. De Palma uses a lot of European techniques to endow Carrie with a certain artful trashiness. It's visually very entertaining. Even in its most disturbing moments you find yourself laughing--it's all too histrionic to take seriously, unless you want to view it as a morality tale about the dangers of sexual repression.

Pino Dinaggio's score, which frequently rips off Bernard Herrmann's staccato violin from the Psycho shower scene, is very elegant but also over-the-top. It echoes De Palma's sensibility as a director all the way: violent, chaotic, and sensual, driving yet richly beautiful. Except for the Hermann imitations it's good.

The revenge element--the reason I'm including Carrie in my series on revenge in high school--points, partially, to the movie's endurance in popular culture. Sissy Spacek is so pathetic in the lead that it's hard to really see Carrie as the monster. She's been spit on by everyone, and stifled by her mother, who comes off as the movie's true villain. This might explain why Sissy Spacek did not become typecast as a horror movie star the way Anthony Perkins did for playing Norman Bates in Psycho. People seem to view Carrie as a validation of their wretched high school experiences, and they take comfort that they weren't alone. Carrie's always having a worse day than you, and her telekinetic meltdown elevates high school into the Shakespearean tragedy that everyone falsely makes it out to be in real life. She validates the stupid drama by sending the school up in flames. At least they had the guts to in Carrie what they ultimately couldn't do in Heathers.