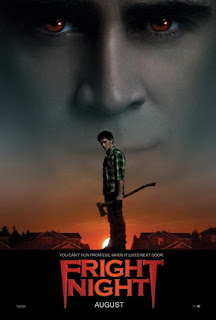 The original Fright Night (1985) was a celebration and a send-up of camp. The movie opens to a dimly lit suburban neighborhood around midnight, and the audio of a late-nite horror movie program leads us into the bedroom of our hero, Charlie Brewster, who's too busy making out with his girlfriend to notice what's going on at his new neighbor's house, at first. Fright Night 1985 is something special to me, so I felt ambivalent toward the idea of a remake.

The 2011 remake gives Fright Night a contemporary make-over. It would seem like a refreshing antidote to the banality of Twilight, which is pure drivel as romance or as gothic horror.

We'll start with the good things: Anton Yelchin makes for a convincing Charlie Brewster, the put-upon boy-who-cried-wolf of the movie, who's unwilling to accept his nerdy friend Ed's claim that Charlie's new neighbor, the dashing Jerry Dandrige, is a bloodsucking vampire. As Dandrige, Colin Farrell is wonderfully ominous. He's so enjoyable as the vampire that you have a hard time sympathizing with the would-be victims. Dandrige likes screwing with his prey, playing darkly funny little mind games with them. Unfortunately, the scenes of Dandrige attacking his victims fall flat. There's something unconvincing about the way he tears open their necks (and their deaths seem meaningless the way they do in slasher movies). Only the satisfaction in Jerry's face works for those scenes--his insatiable appetite for blood is momentarily soothed, and he reminds you that the vampire is the ultimate junky.

The Peter Vincent character, played as a doddering old coward by Roddy McDowall in the 1985 version, has been altered for humorous affect to be a Las Vegas hack occultist with a nightly horror show. David Tennant plays him, and he invests some momentary comic relief, but his part never gets knitted into the story with any real panache. He and Charlie don't really mesh as a duo--they aren't given enough time.

Which brings me to the not-so-good stuff. The movie plays all its cards too soon. Characters aren't developed, relationships either, with the right pacing or momentum. We're meant to assume a lot about these relationships that, without experiencing them in the right ways and amounts of time, end up hurting the movie. It's harder to care about the characters let alone be scared for them. The humor in the movie is good because it keeps things light and helps avoid heavy-handedness, but at the same time no one seems very invested in what's happening. And there isn't that affection for the genre that makes a good horror-comedy click and resonate the way it should.

The rest of the cast includes Toni Collete as Charlie's mom (well-played for more comic effect), Imogen Poots as his girlfriend Amy, and Christopher Mintz-Plasse as Ed. He doesn't even come close to the off-the-wall performance of Stephen Geoffreys in the first film. He's too subdued, too nerdy to be frightening when he inevitably turns into an enemy. And that's the real problem with the remake: it's not all that scary. But it's good for a laugh, and probably worth seeing for Colin Farrell's performance alone.

The scene at the end with all the vampires is another problem. It reminded me of the part in Salem's Lot when they stumble upon Barlow's coffin under the house but are accosted by all his vampire henchmen. It's also mildly reminiscent of that wonderfully giddy moment in Re-Animator when all the corpses shoot up out of their gurneys in unison. Unfortunately, director Craig Gillespie doesn't seem to know how to make that scene pop the way it should. It feels deflated. The only other thing I'll say about the ending is that its kind to the viewer in not subjecting us to twelve phony climaxes the way so many action and horror movies feel obliged to do---the finale is nicely compact.
by Jacob Lusk @ pannedreview
Email ThisBlogThis!Share to TwitterShare to FacebookShare to Pinterest
Tags 2011, Anton Yelchin, Colin Farrell, Dave Franco, David Tennant, Imogen Poots, Toni Collette